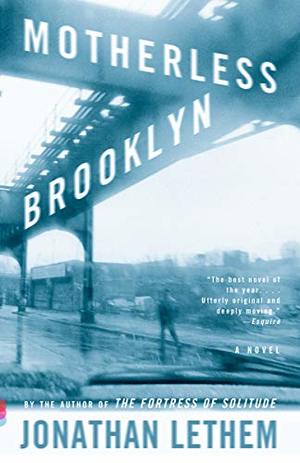 Jonathan Lethem
From America's most inventive novelist, Jonathan Lethem, comes this compelling and compulsive riff on the classic detective novel.Lionel Essrog is Brooklyn's very own self-appointed Human Freakshow, an orphan whose Tourettic impulses drive him to bark, count, and rip apart our language in startling and original ways.  Together with three veterans of the St. Vincent's Home for Boys, he works for small-time mobster Frank Minna's limo service cum detective agency. Life without Frank Minna, the charismatic King of Brooklyn, would be unimaginable, so who cares if the tasks he sets them are, well, not exactly legal. But when Frank is fatally stabbed, one of Lionel's colleagues lands in jail, the other two vie for his position, and the victim's widow skips town. Lionel's world is suddenly topsy-turvy, and this outcast who has trouble even conversing attempts to untangle the threads of the case while trying to keep the words straight in his head.  Motherless Brooklyn is a brilliantly original homage to the classic detective novel by one of the most acclaimed writers of his generation.

@oncearoundbooks
Reviewed: 2020-06-17
Maybe I've just been lucky picking out some incredible books lately, but I feel like a lot of them are "my new favorite", or "one of the best I've read this year", but I really have to say it again for Motherless Brooklyn. Lethem's writing style had me from the beginning, and the story, being told from the perspective of Lionel Essrog, a man with Tourette's Syndrome was fascinating. It reads like a mystery/detective novel, but really, it's so much more than that.

Also, it was just one of those books that I could identify with on a somewhat personal level. Even though my son is autistic, and doesn't have Tourette's, there were some similiarites that really hit home. It kind of opened my eyes to why he was echolaliac. I mean for awhile, before speech therapy, the only words my son Treston would say would be words just spoken to him. I've always just been curious as to why he has to come and tap me five times on my knee or shoulder before trying to communicate. Reading this book kind of gave me an inside look at why these things happen, since I've always just wanted to ask Treston what he's thinking, but at the same time, knowing he's not able to answer me. Lionel's story just put these characteristics into more real-life situations, and not just textbook answers. It kind of gave me hope that Treston can have a somewhat "normal" life (not that I want him to become a Minna Man or anything), but when he gets older he will be able to have friends and relationships--even if they're dysfunctional, but really, who doesn't have some of those?

Wow, I know that's a lot to take from a so-called detective novel, but really, it's that good. I highly recommend this one!