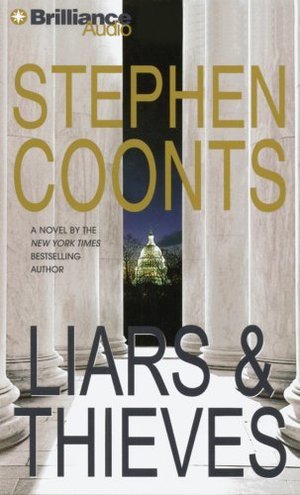 Stephen Coonts
Tommy Carmellini - who dazzled thriller fans in Stephen Coonts's CUBA and LIBERTY - is the CIA's top man for jobs that require extreme stealth, breaking-and-entering skills, and split-second, sometimes lethal, decisions. In LIARS & THIEVES, he's sent to post guard duty at a farmhouse in Virginia's remote Blue Ridge Mountains, where top government operatives are debriefing a star defector: the ultimate KGB insider, a man with records on every operation and every dirty trick the shadowy intelligence agency has ever run, from Lenin to Putin. Carmellini arrives to find the guards shot dead, and a ruthless team of commandos - American commandos - slaughtering everyone in sight, then setting the house on fire. He escapes a hail of bullets and a deadly mountain car chase with what seems to be the sole survivor, a beautiful and mysterious translator who steals his car and leaves him for dead at the first chance. What secrets did the defector know? Who would have killed to prevent him from talking? And how could a hit team act so fast, so efficiently, and so murderously without intimate, inside knowledge of the debriefing? Smart money says someone in the U.S. government is behind the massacre and is now after Carmellini. And that begs the biggest question of all: in a world where nothing is as it seems and no one is who he pretends to be, who can Carmellini trust? Finding out will be terrifying. The answer may be deadly.