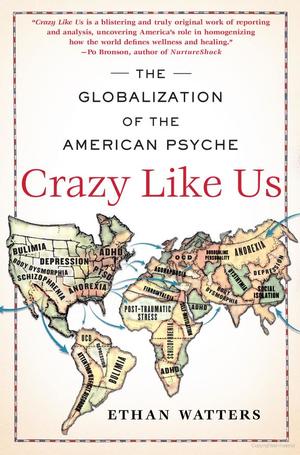 Ethan Watters
It is well known that American culture is a dominant force at home and abroad; our exportation of everything from movies to junk food is a well-documented phenomenon. But is it possible America's most troubling impact on the globalizing world has yet to be accounted for? In Crazy Like Us, Ethan Watters reveals that the most devastating consequence of the spread of American culture has not been our golden arches or our bomb craters but our bulldozing of the human psyche itself: We are in the process of homogenizing the way the world goes mad. America has been the world leader in generating new mental health treatments and modern theories of the human psyche. We export our psychopharmaceuticals packaged with the certainty that our biomedical knowledge will relieve the suffering and stigma of mental illness. We categorize disorders, thereby defining mental illness and health, and then parade these seemingly scientific certainties in front of the world. The blowback from these efforts is just now coming to light: It turns out that we have not only been changing the way the world talks about and treats mental illness -- we have been changing the mental illnesses themselves. For millennia, local beliefs in different cultures have shaped the experience of mental illness into endless varieties. Crazy Like Us documents how American interventions have discounted and worked to change those indigenous beliefs, often at a dizzying rate. Over the last decades, mental illnesses popularized in America have been spreading across the globe with the speed of contagious diseases. Watters travels from China to Tanzania to bring home the unsettling conclusion that the virus is us: As we introduce Americanized ways of treating mental illnesses, we are in fact spreading the diseases. In post-tsunami Sri Lanka, Watters reports on the Western trauma counselors who, in their rush to help, inadvertently trampled local expressions of grief, suffering, and healing. In Hong Kong, he retraces the last steps of the teenager whose death sparked an epidemic of the American version of anorexia nervosa. Watters reveals the truth about a multi-million-dollar campaign by one of the world's biggest drug companies to change the Japanese experience of depression -- literally marketing the disease along with the drug. But this book is not just about the damage we've caused in faraway places. Looking at our impact on the psyches of people in other cultures is a gut check, a way of forcing ourselves to take a fresh look at our own beliefs about mental health and healing. When we examine our assumptions from a farther shore, we begin to understand how our own culture constantly shapes and sometimes creates the mental illnesses of our time. By setting aside our role as the world's therapist, we may come to accept that we have as much to learn from other cultures' beliefs about the mind as we have to teach.