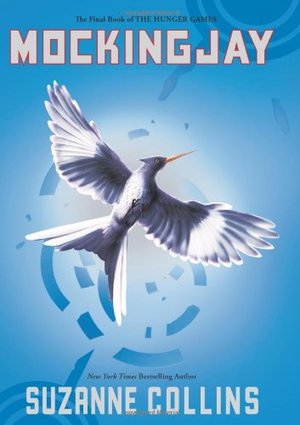 Suzanne Collins
Against all odds, Katniss Everdeen has survived the Hunger Games twice. But now that she's made it out of the bloody arena alive, she's still not safe. The Capitol is angry. The Capitol wants revenge. Who do they think should pay for the unrest? Katniss. And what's worse, President Snow has made it clear that no one else is safe either. Not Katniss's family, not her friends, not the people of District 12. Powerful and haunting, this thrilling final installment of Suzanne Collins's groundbreaking The Hunger Games trilogy promises to be one of the most talked about books of the year.

***DO NOT READ if you have not read The Hunger Games and then Catching Fire. This is the third/final installment of the series and you will either be lost to referenced events or character development.***

Mockingjay is a much different read when you look at the tone of it all. Sure, Katniss has gone through a lot of PTSD before The Hunger Games really started and more so in Catching Fire. But, you truly see the mental and emotional impact of the Hunger Games and war has on people. You don't necessarily see it in just Katniss. You see it in Finnick, Peeta, Gale, Prim, Buttercup, and Haymitch. You pretty much see it in everyone. You watch how everyone copes with the entire issue whether that's complete avoidance, drugs, alcohol, or keeping your hands busy with anything to try to get your mind off all the pain and suffering they and their loved ones have and are currently enduring.

This book really shows what war is like and how it can bring both the best in people and the worst in others. War brings some hard losses, broken relationships, and misguided delusions. I know most of the time Katniss is pretty close to being completely incapacitated (You would be if you were in her position.), but the people she loves gives her the strength to fight and be what the people of Panem needs: the Mockingjay.

This book really pulled at my heartstrings because the book comes full circle to the beginning of the series and the purpose of why Katniss really went to the Hunger Games in the first place.

I really liked the ending before the epilogue. I thought it was another clever ending and shows how Katniss really starts Panem with a fresh start despite costing her pretty much everything. I thought the epilogue was a bit unnecessary and forced, but I understand the purpose of it. It's to show that there is hope despite everything that Katniss and Peeta and everyone else has gone through.

Overall, the book was well done as the installments prior to that. I would not recommend this book to someone who is looking for a light or fun read. This series, in general, is pretty dark, but this book in the series is probably the darkest.

School Library Journal: Collins is absolutely ruthless in her depictions of war in all its cruelty, violence, and loss, leaving readers, in turn, repulsed, shocked, grieving and, finally, hopeful for the characters they've grown to empathize with and love.

violence-Torture and deaths of many important supporting characters, with limbs blown off, faces/bodies melting, and necks broken by frightening beasts hunting them in sewers. Lots of weapon use, both in combat and for hunting. Constant sense of danger and peril. Bombings with many casualties -- even hospitals and large groups of children aren't spared.

Substance use-Lots of a drug called "morphling" -- which has the same effects as morphine -- is given out to sick patients, including main characters; some become addicted to it. Haymitch is a recovering alcoholic at the beginning of the book, but only because alcohol isn't allowed in District 13. He's back to drinking heavily when he leaves.

@slowsho
Reviewed: 2019-04-20
Definitely not as tightly narrated a the first two, this book was something of a letdown. As much as I appreciate the idea of a flawed young female protagonist, I think the fact that the books are written from her perspective are a weak link throughout the series, but here more than any other. I kept wondering what a third person POV of this book may have done with the story, and since I haven't seen the films yet, I'm very curious to watch them now to see how they deal with these issues.
At any rate, an overall okay read, considering it was a grossly simplified story about a war of independence, as it were.
@leaderpikachu
Reviewed: 2018-09-13
The perfect finally to the trilogy. Really brought everything together, with of course, more death. With a realistic ending to all the war.
@jcallaway
Reviewed: 2018-01-17
I wasn't really sure of some of the choices that were made early on in this book and wasn't sure how Suzanne Collins could pull off a great finale to The Hunger Games Trilogy. But she did! It was another one of those books I couldn't put down. The themes in this series are excellent. There is no victor in War.
@bookaddictguide
Reviewed: 2017-12-07
Original review from first read 6/9/11 (3 stars): An interesting ending to the series, but I have to say, I was a little disappointed. There was a giant build up to the end of the entire novel and it seemed to all end too quickly and I was confused as to what was going on at first. The end caught me by surprise because I didn't know it was happening. All-in-all, it was still a good read, enjoyable, and a must to finish the series.

Review from second read 3/21/13: Wow, so I first read this book almost two years ago and upon the second reading, I can definitely say my opinion has improved!!! Still my least favorite of the trilogy but I bumped my rating up from three stars to four.
I think I was SO excited to finish the series the first time around that I raced through the ending too much and lost a lot of content by jumping here and there. I had the audiobook this time so my pacing was set for me!
There were a lot of things I didn't remember about the end so that was really fun still being able the be surprised.
Oh, and the epilogue was sooooo cheesy. I could have totally done without that (and forgot it was even in the book).

Review originally posted on The Book Addict's Guide: This is my second time around reading the entire trilogy of THE HUNGER GAMES and honestly, I was hoping as I went into MOCKINGJAY the second time around that I would come out on the other side with a better overall opinion of it. When I first read MOCKINGJAY, I wrote in my Goodreads review that I felt like it ended much too quickly and I was really disappointed with the turns it took. The beauty of re-reading this book via audiobook was that I wasn’t allowed to rush through anything. Here’s the thing: Whenever I get excited about ANY part in a book, I rush rush rush to read and find out what happens. I skip paragraphs of description and just read dialogue, I jump to the next page, I skim through pages so I can get to the end faster… And I totally think that ruined my reading experience the first time around! MOCKINGJAY still isn’t my favorite book of the series by far, BUT I did rate it a whole star higher on Goodreads this time around!

So that probably should have been the last paragraph of the review, but somehow it’s the first. I gave away the ending!!!! Oh well.
Moving on… I think MOCKINGJAY was my least favorite of the series for a few reasons. For one, I felt like Katniss was exceptionally whiny in this book. I mean, yes, no kidding that she has a ton of crazy stuff to deal with (and I also partially blame the narrator of the audiobook because I think she has a really weird voice which is NOT how I would have Katniss sounding in my head at all) but I see less and less of her bravery and determination in MOCKINGJAY. Too many times I felt like she was giving up instead of using her “fire” (ha) to fight back.

I also really did not like the development of the love triangle in this book. I was already more on Gale’s side than Peeta’s so the whole hijacked-Peeta did not help me like him more in this book. I remember through the first read it was annoying and almost painful to read about Peeta hating Katniss so much, but somehow this time around, it didn’t feel nearly as abrasive at all.

Then there’s my issue with seemingly all final books in dystopians: The politics. I’m rarely interested in political story arcs in books. I’m just not interested in politics in real life and fictional politics often frustrate me instead of interest me. Now I get that the entire trilogy is kind of centered around this political aspect (whoops?) but MOCKINGJAY really gets into the ins and outs of how to take down President Snow and the capitol and some of it just lost my interest.

Oh, and I TOTALLY forgot about the epilogue. Probably because it was super cheesy. I really could have done without that.

I’m really glad that MOCKINGJAY turned out to be a better read for me the second time around, but it still was my least favorite of the series. I really think the audio version helped me with pacing but took a little away from how I felt about Katniss as a character.
Would I re-read the series again? I’m actually not sure. Usually I’ll re-read my favorite series until the cows come home, but at least for now, I feel satisfied with going back over these books once. I may skim through CATCHING FIRE before the movie comes out and I really do feel like I can always go back to THE HUNGER GAMES and enjoy it, but I don’t know if I really want to push as far to read MOCKINGJAY for a third time.
@csherma7
Reviewed: 2017-10-14

Don't read unless you want little hints of absolute distopian future. The critical reader will find all sorts of juicy political commentary on current American affairs.