Black Tides of Heaven (Tensorate, #1), The 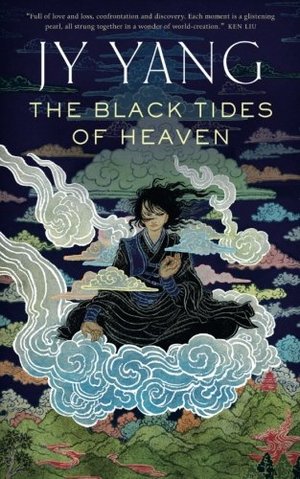 J.Y. Yang
The Black Tides of Heaven is one of a pair of unique, standalone introductions to JY Yang's Tensorate Series, which Kate Elliott calls "effortlessly fascinating." For more of the story you can read its twin novella The Red Threads of Fortune, available simultaneously.Mokoya and Akeha, the twin children of the Protector, were sold to the Grand Monastery as infants. While Mokoya developed her strange prophetic gift, Akeha was always the one who could see the strings that moved adults to action. While Mokoya received visions of what would be, Akeha realized what could be. What's more, they saw the sickness at the heart of their mother's Protectorate.A rebellion is growing. The Machinists discover new levers to move the world every day, while the Tensors fight to put them down and preserve the power of the state. Unwilling to continue as a pawn in their mother's twisted schemes, Akeha leaves the Tensorate behind and falls in with the rebels. But every step Akeha takes towards the Machinists is a step away from Mokoya. Can Akeha find peace without shattering the bond they share with their twin?

@arbreazeale
Reviewed: 2021-01-21
to-read
@scaredofspiders
Reviewed: 2018-12-26
This is one half of a pair, the other of which I have not read. I'm not 100% sure why they were written this way but it forces me to review this book without having the context of the other book to maybe flesh it out a little.
This book follows Akeha, one of a pair of unexpected twins born to the Protector of the Protectorate. . . . The Protector appears to have no plan or expectations of this kid and he really doesn't seem to appreciate that lack of interest, even as he says everything she does has a hidden purpose... There's some holes, lets say. But when you skip through 30+ years of a person's life in such a quick fashion, there's bound to be some logical inconsistencies, right?
There's interesting stuff in here. The magic is called "The Slack" which gives me a bit of a chuckle. More interestingly, people in this universe get to determine their own sexual identity. There's not a lot of detail given about the physical makeup of children before they make this determination, but presumably up until this time they don't actually experience "puberty" and levels of the various sex hormones are maintained at some sort of equal level. Wouldn't that be nice? People apparently can opt out entirely of the final physical modification (accomplished via magical means). I'm not sure if they can opt out of determining male or female, but probably. I knit most of this together, myself--the book doesn't bother to stop and discuss it in detail.
On that note, I think the world could stand to be more clearly described. There's something going on with day/night cycles that is alluded to but it's all meaningless word filler because no explanation forthcoming.
At 240 pages, the story is pretty short. If you want a lot of pages for your dollars this might not be for you. Honestly, if the covers weren't so gorgeous I might not have bothered either. I can tell there's a lot more world and story to tell but we're getting a pretty skimpy run through. It's almost like rereading the Bad Company novels after a while. My brain always remembers details that the author never supplied because Glen Cook gives you nearly nothing. J.Y. Yang has an intricate world here. I'd like to have a bit more about it to read.
I do have the sister novel and the sequel to them both and I fully intend to read them. Probably in the next day and a half because it took me less than 5 hours to read this.
Item Posts
@chibireads1y 3mo
completed ... on 2018-07-15
@chibireads1y 3mo
began ... on 2018-07-07
© 2021 libib.com / All rights reserved