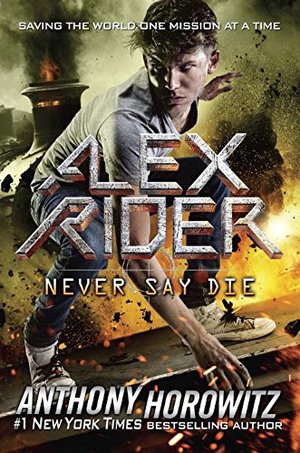 Anthony Horowitz
The world’s greatest teen spy is back in action in a thrilling new mission: destroy once and for all the terrorist organization SCORPIA. Americans may have purchased more than 6 million copies of Alex's adventures, but now, more than ever, we all need his heroics.Following the events of Scorpia Rising, Alex relocates to San Francisco as he slowly recovers from the tragic death of his best friend and caregiver, Jack Starbright, at the hands of terrorists working for SCORPIA. With Jack gone, Alex feels lost and alone, but then, out of the blue, he receives a cryptic email--just three words long, but enough to make Alex believe that Jack may be alive. Armed with this shred of hope, Alex boards a flight bound for Egypt and embarks on a dubious quest to track Jack down.Yet SCORPIA knows Alex's weakness. And the question of whether Jack is alive soon takes a backseat to a chilling new terrorist plot--one that will play with Alex’s mind as he grasps the magnitude of what is at stake.From Egypt to France to Wales, from luxury yachts to abandoned coal mines, Alex traverses a minefield of dangers and cryptic clues as he fights to discover the truth. The #1 New York Times bestselling series, perfect for fans of James Bond and Jason Bourne, is back with a vengeance!Praise for Never Say Die"Once again amid races, chases, hails of bullets, and increasingly spectacular explosions, the teenage James Bond pulls off one awesome feat of derring-do after another. [This] fresh caper . . . roars along to a (naturally) explosive climax."—Booklist"In his usual breakneck fashion, Horowitz whisks Alex from one improbable situation to another . . . this installment is sure to please Alex's legions of fans."—Kirkus Reviews

“His foot wouldn’t move. How long had he been underwater? He knew he couldn’t survive any longer. It was over. He opened his mouth to scream.” It’s been seven years since Alex Rider’s last appearance in Scorpia Rising, but only a few weeks have passed for Alex himself when Never Say Die begins. Jack Starbright, Alex’s beloved caregiver, thought dead from a car bomb, has managed to get a message to him. Alex immediately leaves his safe, soft life in California to look for her, exploding his way through Egypt, France, and England on his way to find her. It’s a wild ride from start to finish and, in true Alex Rider fashion, is thick with action until almost the very last page. And this time, Alex works almost entirely on his own - there are no fancy gizmos from MI6 or even much help from adults at all. This is the eleventh book in the Alex Rider series, but it is also a new beginning, as a new threat has risen to replace the deadly Scorpia organization, which fifteen-year-old Alex took down in his last book. Even though only a few weeks have passed for Alex, Horowitz has gently updated the tech available to the intrepid teen spy to match 2018 standards, and there is enough background information in this book that it will be enjoyable to readers who haven’t read the series before without weighing down the story.