All the Ugly and Wonderful Things: A Novel 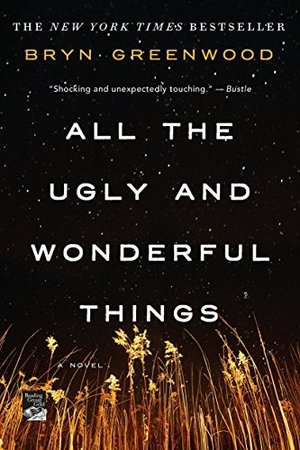 Bryn Greenwood
- A New York Times and USA Today bestseller - Book of the Month Club 2016 Book of the Year - Second Place Goodreads Best Fiction of 2016A beautiful and provocative love story between two unlikely people and the hard-won relationship that elevates them above the Midwestern meth lab backdrop of their lives.As the daughter of a drug dealer, Wavy knows not to trust people, not even her own parents. It's safer to keep her mouth shut and stay out of sight. Struggling to raise her little brother, Donal, eight-year-old Wavy is the only responsible adult around. Obsessed with the constellations, she finds peace in the starry night sky above the fields behind her house, until one night her star gazing causes an accident. After witnessing his motorcycle wreck, she forms an unusual friendship with one of her father's thugs, Kellen, a tattooed ex-con with a heart of gold.By the time Wavy is a teenager, her relationship with Kellen is the only tender thing in a brutal world of addicts and debauchery. When tragedy rips Wavy's family apart, a well-meaning aunt steps in, and what is beautiful to Wavy looks ugly under the scrutiny of the outside world. A powerful novel you won’t soon forget, Bryn Greenwood's All the Ugly and Wonderful Things challenges all we know and believe about love.31 Books Bringing the Heat this Summer ―BustleTop Ten Hottest Reads of 2016 ―New York Daily NewsBest Books of 2016 ―St. Louis Post Dispatch

Can someone tell me what all the buzz is about? The writing was okay, the storyline was okay, the main character was completely unrealistic, the outcome was idiotic, and for anyone who is swooning over that end...Well that's just ill.

I spent a lifetime working with kids that came from homes like the main character, Wavy, and I can tell you that kids don't think that way. While I found her actions realistic, I wasn't at all sold that she would have such a degree of insight as to why she did the things that she did at such a young age. It takes years, if ever, for children to realize what drives their behavior. While some children may be more insightful than others, I have never seen a seven year old that can explain her irrational behavior in such a rational way, but I suppose it makes an easy way to tell a story.

Interestingly tragic factoid: One out of four girls will be sexually abused in some way before getting to adulthood. With Wavy's family being surrounded by drugs, sex, and with there level of neglect, I find it silly to believe that the only abuse she suffered came from the emotional abuse she was subjected to early on by her mother, and the neglect that she suffered through for the duration of being with her family.

Even as a strong child advocate, I still didn't have a big issue with Kellen and Wavy's relationship as far as the 'pedophile' angle. Their relationship started out as, and stayed, a friendship that both of the characters needed, it stayed appropriate for years, and I never got the slightest sense that Wavy was being groomed. Still...It was a sick emotionally codependent relationship, which I assumed was the point of the story, but it turns out that author Bryn Greenwood means to present All the Ugly and Wonderful Things as a bit of a dime store romance. What a crock of shit.

These types of relationships don't have an 'happily ever after', but yet this one did. I so badly wanted Wavy and Kellen to go their separate ways in the end and for Wavy to find some sort of strength within herself. It is such a pity. This author took a tragic story and wrapped it up with a pretty little bow at the end, where the family all comes together, the issue with Wavy's brother comes to a quick wrap, and all is well. Kellen not only saves Wavy, but brings an entire family together? I call bullshit.

After reading a review by a friend I was very intrigued to get my hands on this book. I didn't completely understand what I would get myself into when I started this book. I went in with a very open mind. I am a big fan of taboo reads and not many things really surprise or turn me off in books. This book definitely was taboo but on the other hand the characters in this book are not the characters you find in your every day novels.

Wavy is a little girl with so much responsibility and has been hurt so many times in her life. My heart BROKE for her, there were a couple of scenes that had me crying because nobody really understood her. To people she is weird, antisocial and does things "normal" people wouldn't do. She was unique and so grown-up for her young age. She was fearless and strong, and I just couldn't wait to see who she would grow up to be. Her parents are no good drug dealers/users and don't pay her any mind. They have scarred her so badly with their horrible behavior and teachings. She only has her younger brother who she is very protective of.

They are all alone until they meet Kellen who takes a role as their protector. Kellen has his own problems but I just loved how he took Wavy under his wings and helped her out so much. Their friendship was one of a kind and so heartbreakingly beautiful. This friendship turns into more. I had mixed feelings because of the age difference (especially because Wavy was underaged). There was definitely very inappropriate things happening but I think I could overlook them because Wavy wasn't your typical young girl. In her young life she had been through things others wouldn't go through in their lifetimes. There were a couple of times she came across as immature but other times so grown up.

I was blown away by this book. Wavy and Kellen were both two broken souls that healed each other. This book isn't for everyone because of the taboo elements. Be open minded if you do decide that you want to give this book a chance. I don't think I'll be able to forget this book easily, it has wormed its way into my heart. The characters are very dear to me! I love that there are multiple POVs and that they aren't very long. It really gave a great perspective of how the outside looked into Wavy and Kellen's life. How they were experiencing her "weird" behavior. All the Ugly and Wonderful Things is one of my favorite reads this year and I can't wait to read more from this author. I am very impressed with her writing. She is definitely an author to look out for.