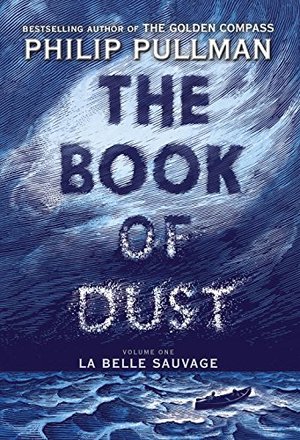 Philip Pullman
The much-anticipated new work from the author of The Golden Compass is coming at last! Renowned storyteller Philip Pullman returns to the parallel world of Lyra Belacqua and His Dark Materials for a thrilling and epic adventure in which daemons, alethiometers, and the Magisterium all play a part.   The Book of Dust will be a work in three parts, like His Dark Materials (The Golden Compass, The Subtle Knife, The Amber Spyglass). The book is set ten years before The Golden Compass and centers on the much-loved character Lyra and her daemon Pantalaimon.   Philip Pullman offers these tantalizing details: “I’ve always wanted to tell the story of how Lyra came to be living at Jordan College, and in thinking about it, I discovered a long story that began when she was a baby and will end when she’s grown up. This volume and the next will cover two parts of Lyra’s life: starting at the beginning of her story and returning to her twenty years later. As for the third and final part, my lips are sealed.   “So, second: is it a prequel? Is it a sequel? It’s neither. In fact, The Book of Dust is . . . an ‘equel.' It doesn’t stand before or after His Dark Materials, but beside it. It’s a different story, but there are settings that readers of His Dark Materials will recognize, and characters they’ve met before. Also, of course, there are some characters who are new to us, including an ordinary boy (a boy we have glimpsed in an earlier part of Lyra’s story, if we were paying attention) who, with Lyra, is caught up in a terrifying adventure that takes him into a new world.   “Third: why return to Lyra’s world? Dust. Questions about that mysterious and troubling substance were already causing strife ten years before His Dark Materials, and at the center of The Book of Dust is the struggle between a despotic and totalitarian organization, which wants to stifle speculation and inquiry, and those who believe thought and speech should be free. The idea of Dust suffused His Dark Materials. Little by little through that story the idea of what Dust was became clearer and clearer, but I always wanted to return to it and discover more.”   The books of the His Dark Materials trilogy were showered with praise, and the Cincinnati Enquirer proclaimed, “Pullman has created the last great fantasy masterpiece of the twentieth century.” With The Book of Dust, Philip Pullman embarks on an equally grand adventure, sure to be hailed as the first great fantasy masterpiece of the twenty-first century.

This started out a little slow, but I didn't mind at all. I enjoy how Pullman develops his characters. they are all complex and interesting- even the background characters! I also needed the time to really dredge up my memories of the Dark Materials trilogy as it's been 6 or so years since I read all three in one go. Then the action finally picked up and I couldn't put it down. Pullman is a very strong writer, and I really needed some good, strong storytelling to get me through the end of this semester.

@morteana
Reviewed: 2018-01-25
Malcolm has heard strange rumors about the baby with the nuns.

Malcolm is certainly about to find out as he is whisked away into a world of secrets and spies.  When the biggest flood London has ever seen comes to wipe everything away, it’s up to Malcolm to make sure baby Lyra is safe – not only from the water, but from the men and women chasing after her.  Especially the man whose daemon is missing a leg….

La Belle Sauvage is not The Golden Compass, but it is quite enjoyable.

Like many of the people reading this book, I have a history with Philip Pullman’s His Dark Materials.  I read them growing up… over and over again… and Lyra and Will are a part of my heart.  When La Belle Sauvage was announced as a prequel, I was a bit skeptical about the choice of setting, but immediately pre-ordered it because of course I was going to read this book… I’ve only been waiting about 20 years for it.  If a reader is expecting for find Lyra and Pan back in all their glory, think again.

THAT SAID, lets talk about Malcolm and Asta, because they’re also delightful new characters.  Mal isn’t this big, brave child – he’s the sort that simply does the things that need doing.  The things he feels are right.  This quality is so important to me in Lyra’s character, and it was amazing to see it in Malcolm.  These children are regular children who see a bad situation, are very careful, and do the right thing as best they can.  Malcolm is good to his parents and kind to baby Lyra.  He is helpful to the nuns when he visits them.  He does what he needs to do, but he doesn’t do it was a self-righteous flash and flare… something fairly rare in heroes.

This is not a complaint, necessarily… more of an observation.  La Belle Sauvage comes in at nearly 500 pages, but most of that is just travel.  There are little adventures along the way, and they are all interesting in their own right, but they are pointless.  They do nothing to move along the plot – they merely distract the reader while we wait for the trio to reach their destination.  There were sections when I found myself asking “Wait, what’s going on?  Who is this?  Why do I care?” which is not particularly good.

For as much as I liked Malcolm and grew to like Alice… I just felt like this book was really draggy and lacked the overall purpose that pulled you into The Golden Compass and the other books.

Plot of The Golden Compass: stop the horrible people who are severing daemons!
Plot of La Belle Sauvage:  make sure Lyra stays safe.

No wonder it’s a bit draggy and underwhelming.  It’s fun and interesting, don’t get me wrong, but I felt strongly that it didn’t live up to the original series.  It felt like a quite long sub-book, like the novellas Once Upon a Time in the North and Lyra’s Oxford.

Fans of His Dark Materials may be disappointed.

I am not, by any means, saying that you should not read this book.  You should.  Malcolm is great, Alice is great, and baby Pan will make your heart melt into a puddle of goo.  But you absolutely cannot go into this book expecting a brilliant revival of His Dark Materials.  It doesn’t happen.  Not even a little.  I think even the most open-minded readers will fall into this feeling as though it lacks something.

I feel it’s also interesting to know… the second book in the Book of Dust trilogy is called The Secret Commonwealth.  It’s not set after this one, so we’ll never know what happened precisely with Oxford Street or The League of St. Alexander or Mal and Asta.  It’s set twenty years in the future, long after the events of all the currently published books in this world.  This really further cements my feeling that this are extended novellas and I have mixed feelings about the whole thing.