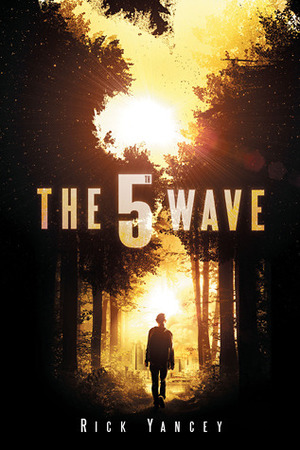 Rick Yancey
The Passage meets Ender's Game in an epic new series from award-winning author Rick Yancey. After the 1st wave, only darkness remains. After the 2nd, only the lucky escape. And after the 3rd, only the unlucky survive. After the 4th wave, only one rule applies: trust no one.Now, it's the dawn of the 5th wave, and on a lonely stretch of highway, Cassie runs from Them. The beings who only look human, who roam the countryside killing anyone they see. Who have scattered Earth's last survivors. To stay alone is to stay alive, Cassie believes, until she meets Evan Walker. Beguiling and mysterious, Evan Walker may be Cassie's only hope for rescuing her brother--or even saving herself. But Cassie must choose: between trust and despair, between defiance and surrender, between life and death. To give up or to get up.

@amslatis
Reviewed: 2021-07-05
Surprisingly enjoyable, good sense of characters, a little too much of "what is going on, is this person bad or good" but enough to pull the story forward. Would've liked for it to be a singular story, not sure when I'll get around to the sequels.
@torykohrin
Reviewed: 2021-05-22
Reading the the first part(s), I thought I will finally give something 5 stars
Through the middle part, I ve considered quitting and/or burning the book (not literary of course)
This book is such a beautiful blend of chaos I am still not sure it deserves anything but a lot of swearing - no buts or even ifs. It felt so pathetic and ... it also felt glorious. It seemed all genially orchestrated and horribly messy ...

It was so NOT what I expected.

And in the parts then exceeded my expectations, there is some serious wasted potential (I love a good romance but it ruined the whole badass, apocalyptic atmosphere).

Why then 4 stars? Well, that s a good question. Really good question ...
@enlasnubess
Reviewed: 2020-02-26
I'm giving it three stars because it was entertaining but way too predictable. The world building was SO promising but didn't live up to its full potential for me. Also the conflicted love interest was kinda pointless, and felt forced and unrealistic :( Might give a chance to the second book.
@agandygirl
Reviewed: 2018-09-28
Highly Entertained - Other than some frustrations in the formatting of this book, I was highly entertained and will anxiously await the continuation of the story. In the end I loved all the characters, but early on in the book I wanted more of Cassie and her side of the story. In introducing the characters there were long (perhaps 100 pages) of her absence which was annoying to say the least. I see similarities in 2 characters (Ringer and Evan) which I am curious to see if these play out in book 2. Are they more alike than we currently know?
@spirit0
Reviewed: 2017-01-29
It’s only a little over a week into the new year, and I’m honestly afraid I might not read anything better than Rick Yancey’s The 5th Wave for the rest of 2016. Katniss and Tris must make room on the YA heroine pedestal for Cassie, one of few survivors of the first four waves of alien attacks on Earth. Cassie has an unwavering will to save her little brother from the clutches of aliens. But the aliens do their clutching with human hands—in this new world, at the start of the fifth wave of deaths, it’s impossible to tell friend from foe, human from alien. The story alternates between Cassie’s point of view and that of her long-time crush, Ben Parish, who becomes a soldier after the aliens attack. Narrators Phoebe Strole and Brandon Espinoza bring this story of survival and spunk to life (even as they describe being surrounded by death and desolation). With the movie adaptation hitting theaters later this month, it’s high time for any fellow humans to get on this hype train. And, as Cassie writes in her diary, “In case you’re an alien and you’re reading this: BITE ME.”

I agree with people that it could've used to be cut down a little bit but damn.
@snorrelo
Reviewed: 2017-01-15
A solid young adult sci-fi. Good pacing, characters and story. Somewhat predictable, but that might stem from having read/seen a few too many alien invasion stories.

Will definitely pick up the next book in this series.
@samisomsam
Reviewed: 2016-02-18

This is totally how I imagine an alien invasion would happen, no green aliens in a ship saying, "Take me to your leader" and I liked that. Rick went back and forth between many different voices, but I never had a problem keeping up with the storyline and who was talking. There are some twists that MAY be a bit predictable as you go along, but I still really liked this book and how it was written. The movie on the other hand, I was not a fan of, so if you saw the movie first and didn't like it, still check out the book.