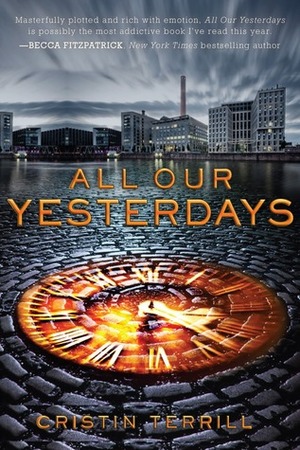 Cristin Terrill
"You have to kill him." Imprisoned in the heart of a secret military base, Em has nothing except the voice of the boy in the cell next door and the list of instructions she finds taped inside the drain.Only Em can complete the final instruction. She's tried everything to prevent the creation of a time machine that will tear the world apart. She holds the proof: a list she has never seen before, written in her own hand. Each failed attempt in the past has led her to the same terrible present-imprisoned and tortured by a sadistic man called the doctor while war rages outside. Marina has loved her best friend James since they were children. A gorgeous, introverted science prodigy from one of America's most famous families, James finally seems to be seeing Marina in a new way, too. But on one disastrous night, James's life crumbles apart, and with it, Marina's hopes for their future. Marina will protect James, no matter what. Even if it means opening her eyes to a truth so terrible that she may not survive it. At least not as the girl she once was. Em and Marina are in a race against time that only one of them can win. All Our Yesterdays is a wrenching, brilliantly plotted story of fierce love, unthinkable sacrifice, and the infinite implications of our every choice. *"Time travel done right.Narrator Em and her boyfriend, Finn, escape from their totalitarian future, time traveling back four years to commit a heart-wrenching assassination of a loved one in order to prevent time travel from being invented and the future from turning so wrong. The future's hinted-at horrors are threatening but expertly backgrounded, avoiding dystopia-fatigue. The clever, accessible time-space treatment isn't weighed down by jargon. Em and Finn's proactive mission means the characters are the hunters instead of the frequently seen on-the-run teen protagonists. The other side of the storyline, taking place in the past that Em and Finn travel to and starring their past selves, is narrated by Marina (Em, in this timeline) and involves her brilliant yet interpersonally challenged best friend (and crush) James and his friend Finn, who annoys Marina, as they deal with a tragedy in James's family. The believable, complex relationships among the three characters of each respective time and in the blended area of shared time add a surprise: A plot ostensibly about assassination is rooted firmly in different shades of love. Perhaps richest is the affection Em feels for Marina-a standout compared to the truckloads of books about girls who only learn to appreciate themselves through their love interests' eyes.Powerful emotional relationships and tight plotting in this debut mark Terrill as an author to watch." --Kirkus, starred review

@amslatis
Reviewed: 2021-07-05
all the character development (minus James) seemed to take place "off screen" or in disjointed flashbacks

say everyone's names way, way, way too much
@kateminasian
Reviewed: 2018-03-07
I cannot say enough good things about this book- everybody has to read it. This is young adult at its finest.

"When I finished ALL OUR YESTERDAYS, the first in the Cassandra Chronicles duology, you could have knocked me over with a feather, and I would not have noticed. This is one of those books where in the last few pages you۪re given what you feel is closure, and then boom! The author turns around and smacks you- not with a cliffhanger, but with the possibility of so much more, the understanding that just because the specific story being told ended, doesn۪t mean there isn۪t more for these characters that we۪ve come to know over the 400 or so pages. I love those kinds of books, the ones that allow you to think and imagine and try to plot out what will, or could, or must happen, because it feels like the book could go on forever in your mind."

“But progress is always dangerous, isn't it? Most of the time, walls don't get dismantled brick by brick. Someone has to crash through them.”

--Cristin Terrill, All Our Yesterdays.

I freaking loved this, I listened on Audio and I couldn't stop listening. I was like a headphone junkie. I purchased this as one of my "free trial" selections from audible.com. I did continue my subscription for a few more months at discounted price, but I just canceled it. :( I really wish it wasn't so expensive. Of course if my local library would just get some more interesting books in mp3 format, I wouldn't have to worry. Narration was done by Meredith Mitchell, and I really only have one complaint...which is the volume of her voice would not go up high enough. I really hope that the rest of my audio's from audible are not that way.

This story is about time-travel, but it's uniquely told and with more believability than other books with time-travel. It's not like someone went to sleep in a sleeping bag and woke the next morning in the 1800's or something. There is a actual time-traveling machine with a name even. I couldn't help getting sucked in by this story. It's about life and love and growing up and doing what's right.

According to Goodreads there is a sequel for this book, but if you go to Cristin Terrill's website, you will find that is not the case anymore. This link will take you to...THE HARD TRUTH ABOUT THE ALL OUR YESTERDAYS SEQUEL.

I am sad...but it's ok, because it is better than having a sequel that was made just to make more money from it. There is link to a short (very short) story about Marina and Finn. Hopefully there will be more too. Besides, the ending did make this book seem like it was a stand-alone.