Afterlife of Holly Chase, The 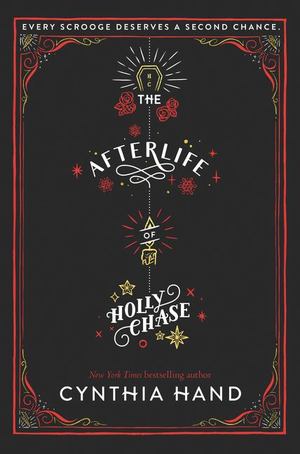 Cynthia Hand
Before I Fall meets "bah, humbug" in this contemporary YA reimagining of A Christmas Carol from New York Times bestselling author Cynthia Hand. On Christmas Eve five years ago, seventeen-year-old Holly Chase was visited by three Ghosts who showed her how selfish and spoiled she'd become. They tried to convince her to mend her ways. She didn't. And then she died. Now she's stuck working for the top-secret company Project Scrooge--as their latest Ghost of Christmas Past. So far, Holly's afterlife has been miserable. But this year's Scrooge is different. This year's Scrooge might change everything... The Afterlife of Holly Chase is a witty, poignant, and insightful novel about life, love, and seizing second (or third) chances, perfect for readers who loved Before I Fall or Dash & Lily's Book of Dares.

@ruthsic
Reviewed: 2018-01-25
The Afterlife of Holly Chase is a retelling of A Christmas Story, with the Scrooge, in this case Holly Case, not learning from the dream and continuing her Scrooge-y ways. Now, I haven't read the original book, so I was mostly flying blind with respect to the references, but I am not a big believer in Christmas spirit or whatever, so my main interest in the book was the 'afterlife' part. Holly wakes up on Christmas morning but doesn't try to change her ways, so she dies and gets saddled with her version of hell - to be the Ghost of Christmas Past for Scrooges every year henceforth. She works as an indentured spirit in this super-secret company that is part modern-tech, part magic and does this every year, in order to change the world, one person at a time.

Holly is an unlikable character from the start - she doesn't believe in the company motto, and is carrying out her duties because the alternative will be much worse. In short, she resents her afterlife, until this year's Scrooge is announced - Ethan Winters, who is this super hot, super rich jerk (hey, you gotta tell it like it is) and gets interested in him. Despite knowing she has no future with him (hello, technically deceased?) she approaches him IRL (which is an unwritten no-no of the company) and starts to know him. Meanwhile, she is also dodging her new intern, Stephanie, who is this cheerful bubbly college kid who would have been better at her job, but then she starts to become friends with her, too.

It is not meant to be doom-and-gloom, or preachy, and has a light, sometimes comic and cheerful atmosphere to it. The ending, surprising though it may be, also left me very confused as to what actually happened. The world-building of the novel, which until that point had made a weird sense, suddenly fell apart with that ending, and had me questioning the why of things I had accepted during the course of the novel. Nevertheless, it is a good Christmas-themed novel, if you are into that.