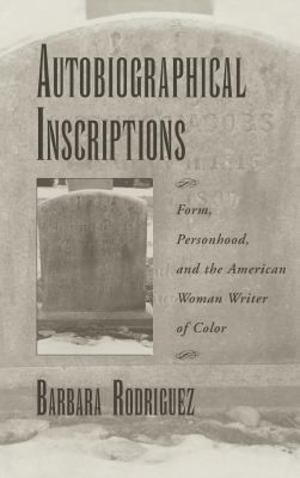 Rodriguez, Barbara
As life-writing began to attract critical attention in the 1950s and 60s, theorists, critics, and practitioners of autobiography concerned themselves with inscribing--that is, establishing or asserting--a set of conventions that would define constructions of identity and acts ofself-representation. More recently, however, scholars have identified the ways in which autobiographical works recognize and resist those conventions. Moving beyond the narrow, prescriptive definition of autobiography as the factual, chronological, first-person narrative of the life story, criticshave theorized the genre from postmodern and feminist perspectives. Autobiographical Inscriptions contributes a theory of autobiography by women writers of color to this lively repositioning of identity studies. Barbara Rodriguez breaks new ground in the field with a discussion of the ways in which innovations of form and structure bolster the arguments forpersonhood articulated by Harriet Jacobs, Zora Neale Hurston, Hisaye Yamamoto, Maxine Hong Kingston, Leslie Marmon Silko, Adrienne Kennedy, and Cecile Pineda. Rodriguez maps the intersections of form and structure with issues of race and gender in these women's works. Central to the autobiographical act and to the representation of the self in language, these intersections mark the ways in which the American woman writer of color comments on the processof subject construction as she produces original forms for the life story. In each chapter, Rodriguez pairs canonized texts with less well-known works, reading autobiographical works across cultural contexts and historical periods, and even across artistic media. By raising crucial questions about structure, Autobiographical Inscriptions analyzes the ways in which thesetexts also destabilize notions of race and gender. The result is a remarkable analysis of the seemingly endless range of formal strategies available to, adopted, and adapted by the American woman writer of color.