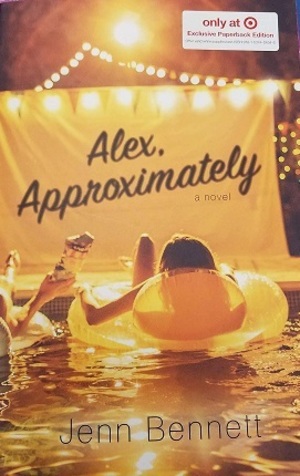 Jenn Bennett
Classic movie buff Bailey "Mink" Rydell has spent months crushing on a witty film geek she only knows online by "Alex." Two coasts separate the teens until Bailey moves in with her dad, who lives in the same California surfing town as her online crush. Faced with doubts (what if he's a creep in real life-or worse?), Bailey doesn't tell Alex she's moved to his hometown. Or that she's landed a job at the local tourist-trap museum. Or that she's being heckled daily by the irritatingly hot museum security guard, Porter Roth-a.k.a. her new arch-nemesis. But life is whole lot messier than the movies, especially when Bailey discovers that tricky fine line between hate, love, and whatever-it-is she's starting to feel for Porter . . . And as the summer months go by, Bailey must choose whether to cling to a dreamy online fantasy in Alex or take a risk on an imperfect reality with Porter. The choice is both simpler and more complicated than she realizes, because Porter Roth is hiding a secret of his own: Porter is Alex . . . Approximately.

This was a good story overall and I am glad that I picked it up at my local Target. I am always a sucker for a good "You've Got Mail" re-telling. I wouldn't recommend it for younger audiences though as there are some sexual references and language in this book. I also found several typos/grammar mistakes. I like the family story background for the male protagonist, Porter "Alex" Roth. I feel as though the female lead, Bailey "Mink" Rydell is a little less confident of a woman character then I would have liked. Her personality was a little lacking but overall still an okay character. Also, the movie line quotes at the beginning of every chapter was great. I would recommend it.