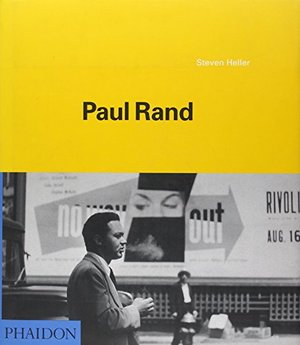 Steven Heller, George Lois, Jessica Helfand
From the Publisher: Paul Rand (1914-1996), by Steven Heller with texts by Armin Hofmann, George Lois and Jessica Helfand. A definitive study of the pioneering figure in American graphic design. First published retrospective on American designer Paul Rand, a major influence in the field of graphics and visual communication. Rand was an art director, teacher, writer and design consultant to major companies, including IBM, Olivetti and Ford. Foreword by distinguished Swiss graphic designer Armin Hofmann, who taught with Rand at Yale University. A meticulous and detailed survey, organized by medium to explore the full range of Rand's advertising, publishing and corporate identity work. More than 400 illustrations from the Rand archive, including logos, posters, book design and unseen work. ABOUT THE AUTHOR(S) Steven Heller is an American art director, journalist, critic, author, and editor.He is author and co-author of more than eighty titles on the history of illustration, typography, and many subjects related to graphic design. Armin Hofmann is one of Switzerland's foremost graphic designers who taught with Rand at Yale and at the Brissago Summer School. George Lois, wunderkind of American advertising, says he owes everything to Rand. In his own right, Lois is the first among equals in the creative revolution in US advertising - he was responsible for the original VW campaign - and no more eminent figure exists in the field. He is author of The Art of Advertising and his most recent book What's the Big Idea? (1991) was widely acclaimed. Jessica Helfand, a former Rand student at Yale, is the new-media columnist for Eye magazine and writes regularly for i-D, Print and the AIGA Journal on design issues. She runs a design studio devoted to new media and is a highly respected writer.