Becoming of Noah Shaw (The Shaw Confessions), The 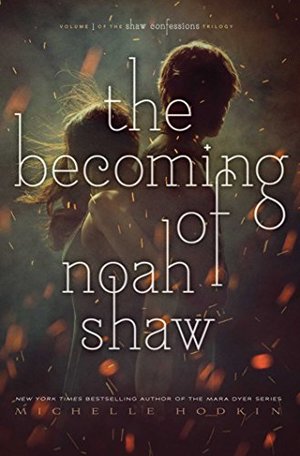 Michelle Hodkin
In the first book of the Shaw Confessions, the companion series to the New York Times bestselling Mara Dyer novels, old skeletons are laid bare and new promises prove deadly. This is what happens after happily ever after.Everyone thinks seventeen-year-old Noah Shaw has the world on a string. They’re wrong. Mara Dyer is the only one he trusts with his secrets and his future. He shouldn’t. And both are scared that uncovering the truth about themselves will force them apart. They’re right.

@ruthsic
Reviewed: 2018-01-25
Warning: Spoilers for the Mara Dyer series in the following review

If you were happy with the HEA that Noah and Mara got in the end of [b:The Retribution of Mara Dyer|15768409|The Retribution of Mara Dyer (Mara Dyer, #3)|Michelle Hodkin|https://images.gr-assets.com/books/1417969205s/15768409.jpg|21474467], stay in that happy place and don't read this book! Just kidding! Like me, you come for the Pain, so yeah if that blurb didn't clue you in to the fact that they will have Problems, let me clarify. Remember that ominous prophecy surrounding the two? Yeah, it is kinda coming to fruition in this series (or at the very least, in this book). Now, to start this book, I would advise readers to please go reread the Mara Dyer series, Retribution especially, or go to Recaptains and get a refresher (it does not have Retribution, though, so will have to reread that book). To say I was excited for this book is an understatement. Since I finally read the Mara Dyer series last year, I have been waiting for this book, AND HOLD ON I AM GETTING TO THE REVIEW LET ME FINISH GUSHING. The main allure of the series has been the fact that there are main characters, who have powers and mental illness - the latter is what sets it apart from similar books. It is part of the plot, the characters, everything - the fact that they are all living with some psychological condition. Mara's is primarily PTSD and Noah's is depression.

The Noah Shaw confessions is, obviously, from Noah's perspective, which we got a little of in The Retribution, but not fully. He is depressed, and his powers make it so that he can't get any relief from it, despite his many experiments with alcohol and substance abuse. It is a little tragic when you consider that his powers are to heal physical ailments (not terminal ones, however, as is pointed out near the start of the book). His only joy in life is Mara, and that becomes evident when you see how he nearly worships her. His unconditional love for her has been proven multiple times in the Mara Dyer series, but Mara's story is that of an anti-heroine born out of her circumstance, so for everyone else, it is like they can't understand how he can keep loving her. For my part, though, I can't get enough of how domestic they are - living together, jokingly proposing and everything. Even Jamie grudgingly ships them. :D

The story's setting is a mystery - about other Gifted popping up and what is happening to them. Without spoiling anything, all I can say it that Noah's suicidal ideation is a part of the plot, and a deepening of the understanding of how Gifted powers work. I was hoping for an explanation of how the prophecy would turn out, but no dice. (I don't understand why Noah and Mara are supposed to be the foil for each other, when their powers are not even opposite of each others, and she is not immune from his). The story, however, explores his mental landscape and his family history and his problems with the legacy he is a part of. The archives that are now in his possession (he has inherited the Shaw estate) are poisoned fruit - and it all depends on what he wants to do with the knowledge that his father bought with the blood of others. The other plot arc is the subtly growing distance from Mara, mostly because of untold secrets (he was pretty much out of commission during Retribution) and that damned prophecy (very crucial, that ending of Retribution).

There are some surprising twists, lots of new characters popping up (it is practically an X-Men convention), some old ones reappearing (some you didn't even expect!), and a suspicious and wary Noah taking you through this ride. I missed Mara's family, esp Joseph, but we at least have Daniel, so I'm okay for now. This is written as an OwnVoices book for the mental health rep, and it shows in how well Hodkin depicts his condition, without shying away from the harsh truths. I also appreciated that she put in trigger warnings at the start of the book to warn/prepare readers.

Honestly, when I finally put down the book (I read it non-stop, ya'll) I was EXHILARATED. This spin-off series is off to an amazing start and I already am looking forward to the next.