War of the Cards (Queen of Hearts) 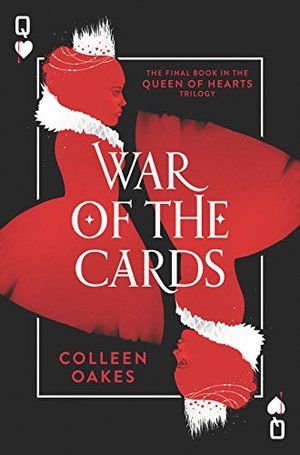 Colleen Oakes
Colleen Oakes’s twisted reimagining of the Queen of Hearts origin story comes to a thrilling conclusion in War of the Cards.Dinah has lost everyone she ever loved. Her brother was brutally murdered. The wicked man she believed was her father betrayed her. Her loyal subjects have been devastated by war. And the boy she gave her heart to broke it completely.Now a dark queen has risen out of the ashes of her former life. Fury is blooming inside Dinah, poisoning her soul and twisting her mind. All she has left is Wonderland and her crown, and her obsession to fight for both. But the war rages on and Dinah could inherit a blood-stained throne. Can a leader filled with love and rage ever be the ruler her kingdom needs? Or will her all-consuming wrath bring Wonderland to its knees?This is not a story of happily ever after.This is the story of the Queen of Hearts.

@aeshley13
Reviewed: 2019-11-09
Best book of the series by far. Made me cry, poor W and D. I hope that they have found some happiness together. I am so happy the author added that epilogue to provide a great conclusion to this sad tale. Great battle scenes, reminded me of Now I Rise series, which I loved. Just a nice overall series. ALSO: I thought wardley redeemed himself throughout this book by proving his dedication to D and I was okay with the fact that he didn’t love her and really liked his character of devotion but then to find out all the details of his love for V/A ughhhh he destroyed it.
@sapphire1211
Reviewed: 2018-06-09

@bookworm0719
Reviewed: 2018-05-07
Everyone is marching to fight in the war for Dinah to take back the crown as the Queen of Hearts. With the Spades and the Yurkei warriors fighting for Dinah, they march towards Wonderland. But Dinah is fighting with this fury that is building up inside of her and if she doesn’t control it a lot of people will be hurt. As we begin to question whether or not she will make a good Queen, mistakes are made that can not be undone. This was a great finale in this Queen of Hearts retelling trilogy. There were a couple of plot twists, which I always love but I did see a couple of them coming. Dinah still continues to grow wonderfully as a character, but some of her actions are questionable. During the battle, it does get to be pretty bloody, so if you are not a fan of that, I would not recommend this book. For me, I enjoyed the battle scenes. While it’s awful for people to die in battle, I just really enjoyed all the action and the writing just painted such a clear picture in my head of what was going on. The character Harris, who has been the caretaker of Dinah since she was born, really grew on me. In Blood of Wonderland, the King of Hearts put him into the Black Towers, and when Dinah goes to see him, it is just so heartbreaking. I also still really love Sir Gorrann, as he continues to be a great father figure to Dinah. Oakes brings small parts of Carroll’s Wonderland into her own story and she does a great job at it. I especially love the reference to the character Lewis in the story. It’s such a small part and if you’re not paying attention while you are reading, you will miss it. We also get a character named Alice in this book, and she’s different and I love the direction Oakes took with this story. This series definitely did not really hook me from the first book, but I think that series continues to get better with each book. I would really recommend this series if you are a fan of the Queen of Hearts, retellings and action. Thanks for reading!
Item Posts
@makaylamw2y 9mo
completed ... on 2019-02-07
@makaylamw2y 10mo
began ... on 2019-01-06
@shixam2y 11mo
began ... on 2018-12-16
© 2021 libib.com / All rights reserved