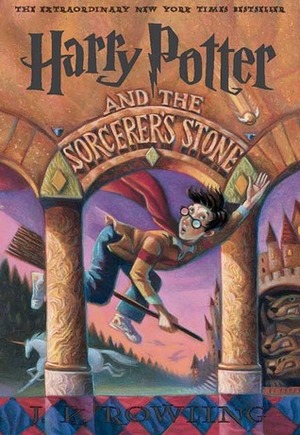 J.K. Rowling
Harry Potter has no idea how famous he is. That's because he's being raised by his miserable aunt and uncle who are terrified Harry will learn that he's really a wizard, just as his parents were. But everything changes when Harry is summoned to attend an infamous school for wizards, and he begins to discover some clues about his illustrious birthright. From the surprising way he is greeted by a lovable giant, to the unique curriculum and colorful faculty at his unusual school, Harry finds himself drawn deep inside a mystical world he never knew existed and closer to his own noble destiny.

In Harry Potter And The Sorcerer’s Stone, Lord Voldemort killed Harry’s parents. He has to live with his Aunt, Uncle, and his cousin. They make him sleep in a cupboard below the stairs. Then letters started appearing in the house. One day a man named Hagrid from Hogwarts broke down the door on Harry’s birthday and brought a cake for him. Hagrid grabbed Harry and rode him on his bike to the train to Hogwarts. When he was on the train he met two friends named Hermoine and Ron. When they got to Hogwarts they got sorted into houses. The hat said Slytherin, but Harry begged the sorting hat to make him go to Gryffindor. Then Professor McGonagall tells Wood to train Harry for Quidditch and show him what all the balls and positions of Quidditch. I like this book because I like wizard books and books that have action in it. I would recommend this book to people that like action in their books.

If any of you love or like magic, dragons, sarcasm, heros with robes, and Quidditch, welcome to Harry Potter Year One. Learn about his adventure he has at Hogwarts and see who he meets. better then the movie.