Girl in the Tower: A Novel (Winternight Trilogy), The 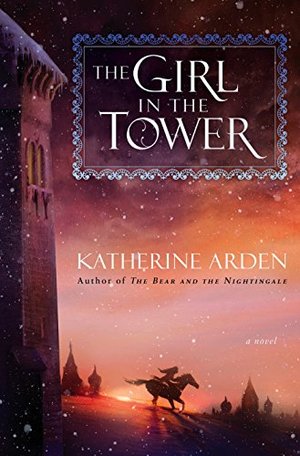 Katherine Arden
A remarkable young woman blazes her own trail, from the backwoods of Russia to the court of Moscow, in the exhilarating sequel to Katherine Arden’s bestselling debut novel, The Bear and the Nightingale.Katherine Arden’s enchanting first novel introduced readers to an irresistible heroine. Vasilisa has grown up at the edge of a Russian wilderness, where snowdrifts reach the eaves of her family’s wooden house and there is truth in the fairy tales told around the fire. Vasilisa’s gift for seeing what others do not won her the attention of Morozko—Frost, the winter demon from the stories—and together they saved her people from destruction. But Frost’s aid comes at a cost, and her people have condemned her as a witch.Now Vasilisa faces an impossible choice. Driven from her home by frightened villagers, the only options left for her are marriage or the convent. She cannot bring herself to accept either fate and instead chooses adventure, dressing herself as a boy and setting off astride her magnificent stallion Solovey. But after Vasilisa prevails in a skirmish with bandits, everything changes. The Grand Prince of Moscow anoints her a hero for her exploits, and she is reunited with her beloved sister and brother, who are now part of the Grand Prince’s inner circle. She dares not reveal to the court that she is a girl, for if her deception were discovered it would have terrible consequences for herself and her family. Before she can untangle herself from Moscow’s intrigues—and as Frost provides counsel that may or may not be trustworthy—she will also confront an even graver threat lying in wait for all of Moscow itself.Advance praise for The Girl in the Tower “Arden’s lush, lyrical writing cultivates an intoxicating, visceral atmosphere, and her marvelous sense of pacing carries the novel along at a propulsive clip. A masterfully told story of folklore, history, and magic with a spellbinding heroine at the heart of it all.”—Booklist (starred review)“[A] sensual, beautifully written, and emotionally stirring fantasy . . . Fairy tales don’t get better than this.”—Publishers Weekly (starred review)

@amslatis
Reviewed: 2021-07-05
Certainly did not enjoy as much as the first book (which would have been better as a stand-alone). The characters introduced didn't feel as engaging and it felt pretty stereotypical. Elements of fairytale felt neglected and HATED that there were multiple instances of "She didn't realize the importance of this" with no additional commentary. What was the relation of the ghost to Vasya? A bit of insta-love. Overall, certainly not a solid follow-up (although beautifully written) and will probably cont. to BK3.
Item Posts
@witchbitch1y 1mo
completed ... on 2020-09-19
@witchbitch1y 1mo
began ... on 2020-09-17
@bridgebury2y 8mo
completed ... on 2019-03-26
© 2021 libib.com / All rights reserved