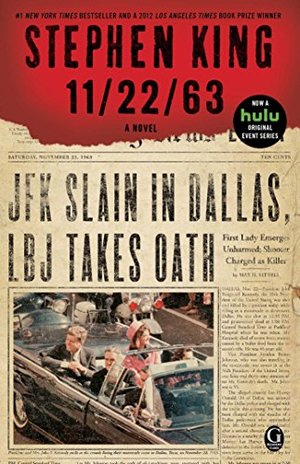 Stephen King
NOMINATED FOR A 2012 LOS ANGELES TIMES BOOK PRIZE Dallas, 11/22/63: Three shots ring out. President John F. Kennedy is dead. Life can turn on a dime—or stumble into the extraordinary, as it does for Jake Epping, a high school English teacher in a Maine town. While grading essays by his GED students, Jake reads a gruesome, enthralling piece penned by janitor Harry Dunning: fifty years ago, Harry somehow survived his father’s sledgehammer slaughter of his entire family. Jake is blown away . . . but an even more bizarre secret comes to light when Jake’s friend Al, owner of the local diner, enlists Jake to take over the mission that has become his obsession—to prevent the Kennedy assassination. How? By stepping through a portal in the diner’s storeroom, and into the era of Ike and Elvis, of big American cars, sock hops, and cigarette smoke. . . . Finding himself in warmhearted Jolie, Texas, Jake begins a new life. But all turns in the road lead to a troubled loner named Lee Harvey Oswald. The course of history is about to be rewritten . . . and become heart-stoppingly suspenseful. In Stephen King’s “most ambitious and accomplished” (NPR) novel, time travel has never been so believable. Or so terrifying.

@nataliedome
Reviewed: 2016-01-16
Jake Epping is a thirty-five-year-old high school English teacher in Lisbon Falls, Maine, who makes extra money teaching adults in the GED program. He receives an essay from one of the students?a gruesome, harrowing first person story about the night 50 years ago when Harry Dunning?s father came home and killed his mother, his sister, and his brother with a hammer. Harry escaped with a smashed leg, as evidenced by his crooked walk. Not much later, Jake?s friend Al, who runs the local diner, divulges a secret: his storeroom is a portal to 1958. He enlists Jake on an insane?and insanely possible?mission to try to prevent the Kennedy assassination. So begins Jake?s new life as George Amberson and his new world of Elvis and JFK, of big American cars and sock hops, of a troubled loner named Lee Harvey Oswald and a beautiful high school librarian named Sadie Dunhill, who becomes the love of Jake?s life ? a life that transgresses all the normal rules of time.
@sarahsteele91
Reviewed: 2014-10-20

Well-researched, but long, dry, and no climax to the build-up. Not a big enough climax anyway. Interesting read, but was bored by page 100 or so.