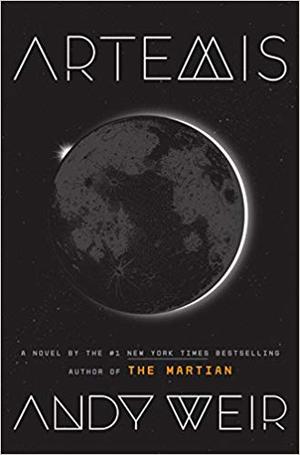 @verkruissen
Reviewed: 2021-03-29
Artemis by Andy Weir is another epic jaunt into space. This time, on the colony of Artemis, which is based on the moon. Our main character Jasmine, AKA Jazz, is a porter by choice who dabbles in smuggling to make a living. Jazz grew up on the moon with her father who is one of the best welders in the community. She met her smuggling partner through a pen pal assignment at school when they were just children. Jazz and her father parted ways several years earlier due to her wild ways and not wanting to do what her father wanted (which was to use her extremely intelligent mind). Jazz is brilliant to say the least. She teaches herself science, chemistry and anything else that may interest her on the way. On one of her regular deliveries of smuggled cigars to one of the moons wealthiest citizens she stumbles into a plan to destroy some equipment for Trond, her cigar smoking citizen, in exchange for one million slugs. Slugs are the currency of Artemis. Things of course do not go as planned and when she finds Trond has been murdered her plans quickly change to one of survival. She recruits some of her closest allies to pull off a stunt that may kill them all but may also be the one thing that saves their city from being overrun by the South American cartel that is heading their way. [return]The book is extremely fast paced and does have a lot of science explained but overall I loved the book. Jazz is hilarious and her friends are just as engaging. I'd really like if there were another book with Jazz as the protagonist again. She was just great. #Artemis #AndyWeir
Item Posts
No posts
© 2021 libib.com / All rights reserved