Cruel Prince (The Folk of the Air), The 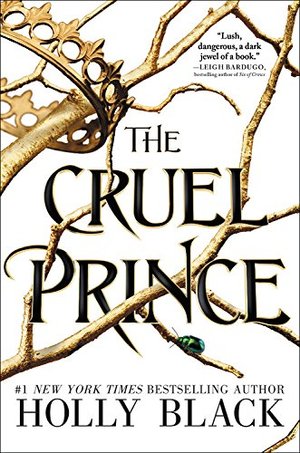 Holly Black
By #1 New York Times bestselling author Holly Black, the first book in a stunning new series about a mortal girl who finds herself caught in a web of royal faerie intrigue. Of course I want to be like them. They're beautiful as blades forged in some divine fire. They will live forever.And Cardan is even more beautiful than the rest. I hate him more than all the others. I hate him so much that sometimes when I look at him, I can hardly breathe.Jude was seven years old when her parents were murdered and she and her two sisters were stolen away to live in the treacherous High Court of Faerie. Ten years later, Jude wants nothing more than to belong there, despite her mortality. But many of the fey despise humans. Especially Prince Cardan, the youngest and wickedest son of the High King.To win a place at the Court, she must defy him--and face the consequences.In doing so, she becomes embroiled in palace intrigues and deceptions, discovering her own capacity for bloodshed. But as civil war threatens to drown the Courts of Faerie in violence, Jude will need to risk her life in a dangerous alliance to save her sisters, and Faerie itself.

@camscott
Reviewed: 2020-08-06
I really enjoyed this book, so much more than I expected. Dark and twisty with poison and magic thrown in. Faerie politics and drama. Riding frogs... looking forward to the rest of the series.
@tween2teenbooks
Reviewed: 2020-07-01

I can't believe I didn't read this book up until now. I'd been hearing so many great things about it online that I finally picked it up yesterday. I'm pretty sure I read the entire book in about four hours. The two main characters are both kinda horrible people, but once you start to see below the surface you can't help but fall in love with them!

At first I wasn't that interested in reading The Cruel Prince. I got the ARC, but it sat on my shelf. I've enjoyed some of Holly's previous books, so I figured I'd get to it eventually. But then I noticed people talking about it. Person after person, both on Twitter and in person, told me just how amazing this book was. I finally gave in, and while home for fall break I grabbed the book. Let me tell you, reading at college isn't always the easiest task. That said, I devoured The Cruel Prince in an afternoon!

These characters were as amazing and awful as I was promised. Holly made Cardan very easy to hate. Jude, while often the victim of faery pranks, has learned to adapt pretty well to the world of faery. To that end, she can give just as much as she gets. While Cardan and Jude hate each other with a palpable tension, their sexual tension is also apparent.

After this point is where Google lost my review. I don't remember what all I wrote, but I'll try to keep the gist of it. *stares angrily at Google*

While Cardan can be pretty mean, Jude can give as good as she gets. Having grown up in Faery, she had to decide whether she wanted to be a victim to the Faeries wiles or attempt to best them. She decides to try to become as close to them as possible, and that means manipulating the heck out people.

While Jude was busy manipulating Faery to her hearts desire, her twin sister became the opposite. She submitted herself to the whims of Faery, and was constantly trying to get Jude to become less conspicuous.

There was also the side character Locke. I won't say much so as not to spoil things, but I want to punch him in the face. For reasons.

The world of Faery is utterly wonderful. The Cruel Prince, while its own series, also builds upon a larger world that Holly Black has been building for years. I happened to read her Tithe series a while back, and it was fun to see some of those characters pop up in The Cruel Prince. The world of Faery obeys many of the common tropes from other books with faeries, such as not being able to lie, it also takes some of them to the next level. The faeries here seem extra crafty. While faeries are often cunning and manipulative, these faeries can be straight up cruel, hence the title.

After reading this book, I understand why everyone was talking about it all year. As soon as I finished it, I wanted to read The Wicked King. Luckily, I had the ARC waiting for me at home!

Actual rating: 3.5 stars
For a book with so many mixed reviews, I didn’t have much trouble forming my own opinion. This book wasn’t the best, but it also wasn’t terrible. There were elements that I thought could be better and the here were element that were spot on.
One thing I didn’t particularly like was that the book somewhat felt like it was written by a teenager. It had that 13 year olds diary feeling, which made it difficult to enjoy at times.
I did love that there was almost no romance between Jude and any of the characters (all great BS between Jude and Locke was just that, BS and it wasn’t entirely necessary). I really liked that there was no romance between her and Carden (not gonna like, I totally ship them, but a book without the romance in The was is my kind of book). I am, however, 100% hoping for something to happen there in book two.
Overall...would I read this again? Yes, I think I would.
Is it something I’ll be looking to reread immediately because it’s the best thing on the planet? Absolutely not.