Woman in the Window, The 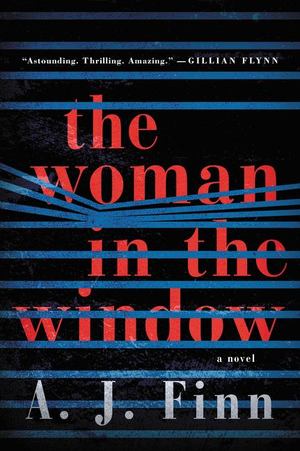 A. J. Finn
"Astounding. Thrilling. Amazing." --Gillian Flynn "Unputdownable." --Stephen King "A dark, twisty confection." --Ruth Ware "Absolutely gripping." --Louise Penny For readers of Gillian Flynn and Tana French comes one of the decade's most anticipated debuts, to be published in thirty-six languages around the world and already in development as a major film from Fox: a twisty, powerful Hitchcockian thriller about an agoraphobic woman who believes she witnessed a crime in a neighboring house. It isn't paranoia if it's really happening . . . Anna Fox lives alone--a recluse in her New York City home, unable to venture outside. She spends her day drinking wine (maybe too much), watching old movies, recalling happier times . . . and spying on her neighbors. Then the Russells move into the house across the way: a father, a mother, their teenage son. The perfect family. But when Anna, gazing out her window one night, sees something she shouldn't, her world begins to crumble--and its shocking secrets are laid bare. What is real? What is imagined? Who is in danger? Who is in control? In this diabolically gripping thriller, no one--and nothing--is what it seems. Twisty and powerful, ingenious and moving, The Woman in the Window is a smart, sophisticated novel of psychological suspense that recalls the best of Hitchcock.

This book reminded me of an amusement ride that seems tame at first, but before you know it, the ride turns out to be a lot more chaotic and exciting than you originally thought. I looked at the comment blurbs on the book from a lot of respected writers indicating that they loved this book. Okay, if Gillian Flynn, Stephen King and Joe Hill liked it, who am I to turn it down? So I started reading. I got about 30 or so pages in and thought, okay it's about an agoraphobic who spends all her time spying on her neighbors. And drinking. And watching old movies. Not particularly exciting, her obsession with her neighbors was more than a little weird, and even the character herself seemed more annoying than sympathetic. But fear not, this book picks up speed in a hurry. There are few books that I have read recently that have truly unpredictable twists and turns that shock me when they are revealed. This book did that. I actually feel like I need to go back and read it again now that I know how it ended, because the beginning wasn't as uneventful as I'd originally thought. Just a fantastically written book that will keep you guessing until the very end. Highly recommend this one. And now I'm going back to read it again...

This book was crazy! The writing was great. Made me feel like I was going crazy. The characters were interesting. The ending came to a shock to me! Not my favorite type of read but was still a great book!