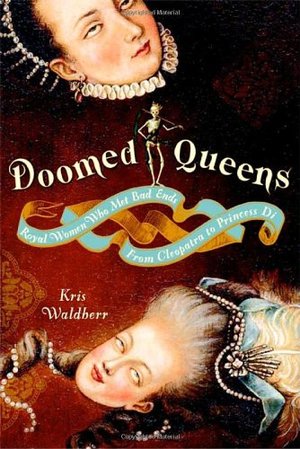 Kris Waldherr
Illicit love, madness, betrayal--it isn’t always good to be the queenMarie Antoinette, Anne Boleyn, and Mary, Queen of Scots. What did they have in common? For a while they were crowned in gold, cosseted in silk, and flattered by courtiers. But in the end, they spent long nights in dark prison towers and were marched to the scaffold where they surrendered their heads to the executioner. And they are hardly alone in their undignified demises. Throughout history, royal women have had a distressing way of meeting bad ends--dying of starvation, being burned at the stake, or expiring in childbirth while trying desperately to produce an heir. They always had to be on their toes and all too often even devious plotting, miraculous pregnancies, and selling out their sisters was not enough to keep them from forcible consignment to religious orders. From Cleopatra (suicide by asp), to Princess Caroline (suspiciously poisoned on her coronation day), there’s a gory downside to being blue-blooded when you lack a Y chromosome. Kris Waldherr’s elegant little book is a chronicle of the trials and tribulations of queens across the ages, a quirky, funny, utterly macabre tribute to the dark side of female empowerment. Over the course of fifty irresistibly illustrated and too-brief lives, Doomed Queens charts centuries of regal backstabbing and intrigue. We meet well-known figures like Catherine of Aragon, whose happy marriage to Henry VIII ended prematurely when it became clear that she was a starter wife--the first of six. And we meet forgotten queens like Amalasuntha, the notoriously literate Ostrogoth princess who overreached politically and was strangled in her bath. While their ends were bleak, these queens did not die without purpose. Their unfortunate lives are colorful cautionary tales for today’s would-be power brokers--a legacy of worldly and womanly wisdom gathered one spectacular regal ruin at a time.