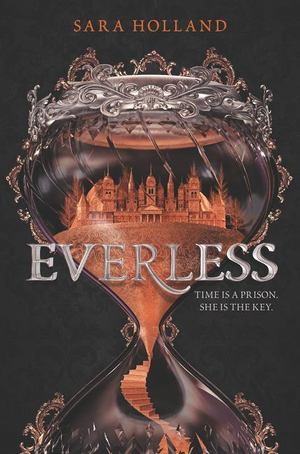 Sara Holland
"Sara Holland is a fierce storyteller. Everless gives new and terrifying meaning to the phrase running out of time." --Stephanie Garber, New York Times bestselling author of Caraval In the kingdom of Sempera, time is currency--extracted from blood, bound to iron, and consumed to add time to one's own lifespan. The rich aristocracy, like the Gerlings, tax the poor to the hilt, extending their own lives by centuries. No one resents the Gerlings more than Jules Ember. A decade ago, she and her father were servants at Everless, the Gerlings' palatial estate, until a fateful accident forced them to flee in the dead of night. When Jules discovers that her father is dying, she knows that she must return to Everless to earn more time for him before she loses him forever. But going back to Everless brings more danger--and temptation--than Jules could have ever imagined. Soon she's caught in a tangle of violent secrets and finds her heart torn between two people she thought she'd never see again. Her decisions have the power to change her fate--and the fate of time itself. Fans of Victoria Aveyard, Kendare Blake, and Stephanie Garber will devour this lush novel's breathtaking action, incredible romance, and dangerous secrets.

Guys this book! It's been so long since I've been sucked into a fantasy!

I am still reeling at the world-building in this book. I honestly don't even care about all the dangers that I would have to worry about; I wanna live in Sempera!

The mythology and history is just so so mesmerizing. And then there is the story.

The twists and turns and danger and risk-taking and the self-discovery of a girl who really knows nothing about herself.

I LOVED the characters. I am so in love with the Gerling brothers and Ina Gold and all the long-lost friends that work as servants at Everless.

I love how much the world's mythology plays a part, I love the entire concept of a world in which time is not necessarily stable.

Did I mention that I loved this book?

I WISH THERE WAS DIVERSITY THOUGH! This is honestly the only thing that kept me from a 5 star review. There are so many different characters and yet the opportunity wasn't grasped.

I still highly recommend this debut novel and what is to be an incredibly gripping beginning to an absolutely fantastic series.


See my full review and more over at my blog!