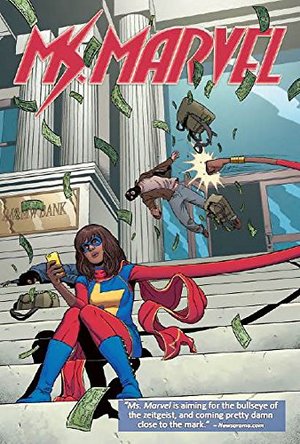 G. Willow Wilson, Adrian Alphona, Jacob Wyatt
Who is the Inventor, and what does he want with the all-new Ms. Marvel and all her friends? Maybe Wolverine can help! Kamala may be fan-girling out when her favorite (okay maybe Top Five) super hero shows up, but that won't stop her from protecting her hometown. Then, Kamala crosses paths with Inhumanity for the first time - by meeting the royal dog, Lockjaw! Every girl wants a puppy, but this one may be too much of a handful, even for a super hero with embiggening powers. But why is Lockjaw really with Kamala? As Ms. Marvel discovers more about her past, the Inventor continues to threaten her future. The fan-favorite, critically acclaimed, amazing new series continues as Kamala Khan proves why she's the best (and most adorable) new super hero there is! COLLECTING: Ms. Marvel 6-11

I loved the Wolverine team-up and also thought the artist for those books was much better than the usual one. I was disappointed when they switched back and also the Inventor was kind of a weak villain.