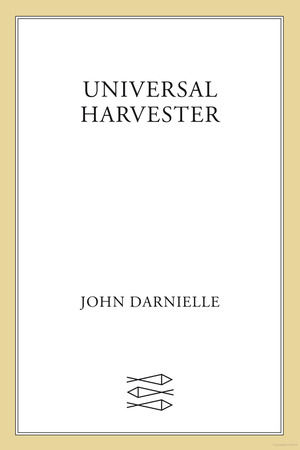 John Darnielle
New York Times Bestseller “Brilliant . . . Darnielle is a master at building suspense, and his writing is propulsive and urgent; it’s nearly impossible to stop reading . . . [Universal Harvester is] beyond worthwhile; it’s a major work by an author who is quickly becoming one of the brightest stars in American fiction.” —Michael Schaub, Los Angeles Times “Grows in menace as the pages stack up . . . [But] more sensitive than one would expect from a more traditional tale of dread.” —Joe Hill, New York Times Book Review “The most unsettling book I’ve read since House of Leaves.” —Adam Morgan, Electric Literature Life in a small town takes a dark turn when mysterious footage begins appearing on VHS cassettes at the local Video Hut. So begins Universal Harvester, the haunting and masterfully unsettling new novel from John Darnielle, author of the New York Times Bestseller and National Book Award Nominee Wolf in White Van Jeremy works at the Video Hut in Nevada, Iowa. It’s a small town in the center of the state—the first a in Nevada pronounced ay. This is the late 1990s, and even if the Hollywood Video in Ames poses an existential threat to Video Hut, there are still regular customers, a rush in the late afternoon. It’s good enough for Jeremy: it’s a job, quiet and predictable, and it gets him out of the house, where he lives with his dad and where they both try to avoid missing Mom, who died six years ago in a car wreck. But when a local schoolteacher comes in to return her copy of Targets—an old movie, starring Boris Karloff, one Jeremy himself had ordered for the store—she has an odd complaint: “There’s something on it,” she says, but doesn’t elaborate. Two days later, a different customer returns a different tape, a new release, and says it’s not defective, exactly, but altered: “There’s another movie on this tape.” Jeremy doesn’t want to be curious, but he brings the movies home to take a look. And, indeed, in the middle of each movie, the screen blinks dark for a moment and the movie is replaced by a few minutes of jagged, poorly lit home video. The scenes are odd and sometimes violent, dark, and deeply disquieting. There are no identifiable faces, no dialogue or explanation—the first video has just the faint sound of someone breathing— but there are some recognizable landmarks. These have been shot just outside of town. In Universal Harvester, the once placid Iowa fields and farmhouses now sinister and imbued with loss and instability and profound foreboding. The novel will take Jeremy and those around him deeper into this landscape than they have ever expected to go. They will become part of a story that unfolds years into the past and years into the future, part of an impossible search for something someone once lost that they would do anything to regain. “This chilling literary thriller follows a video store clerk as he deciphers a macabre mystery through clues scattered among the tapes his customers rent. A page-tuning homage to In Cold Blood and The Ring.” —O: The Oprah Magazine “A stellar encore after the success of [Darnielle’s] debut novel, Wolf in White Van . . . Beneath the eerie gauze of this book, I felt an undercurrent of humanity and hope.” —Manuel Roig-Franzia, The Washington Post “[Universal Harvester is] so wonderfully strange, almost Lynchian in its juxtaposition of the banal and the creepy, that my urge to know what the hell was going on caused me to go full throttle . . . [But] Darnielle hides so much beautiful commentary in the book’s quieter moments that you would be remiss not to slow down.” —Abram Scharf, MTV News “Universal Harvester is a novel about noticing hidden things, particularly the hurt and desperation that people bear under their exterior of polite reserve . . . Mr. Darnielle possesses the clairvoyant’s gift for looking beneath the surface.” —Sam Sacks, The Wall Street Journal “[Universal Harvester is] constantly unnerving, wrapped in a depressed dread that haunts every passage. But it all pays off with surprising emotionality.” —Kevin Nguyen, GQ.com “Darnielle writes beautifully . . . He builds a deep sense of foreboding by giving pieces of the puzzle in such a way that you really can’t see the solution until that final piece is in place.” —Salem Macknee, News & Observer