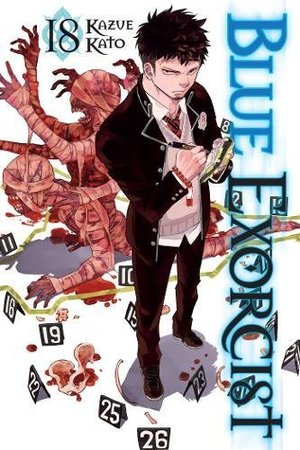 Kazue Kato
Rin and his exorcist classmates are caught in a secret war against the forces of darkness.Raised by Father Fujimoto, a famous exorcist, Rin Okumura never knew his real father. One day a fateful argument with Father Fujimoto forces Rin to face a terrible truth – the blood of the demon lord Satan runs in Rin’s veins! Rin swears to defeat Satan, but doing that means entering the mysterious True Cross Academy and becoming an exorcist himself. After dealing with the demons of Shura’s past, Shura, Rin and Yukio return to True Cross Academy. While Yukio recovers from his wounds, Rin and his friends get back to their lives. But trouble is brewing as the Illuminati continue to advance their plans. Lightning launches an investigation of the Illuminati, intending to get to the bottom of things. With Suguro in tow, he delves into the archives deep below True Cross Academy, where he may uncover secrets that were buried there for a reason…