Fire and Fury: Inside the Trump White House 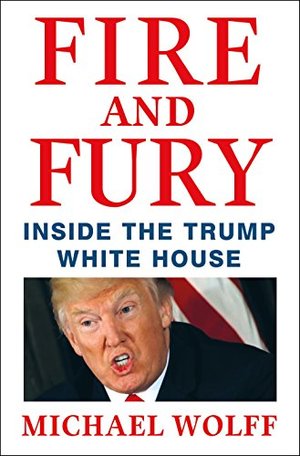 Michael Wolff
With extraordinary access to the Trump White House, Michael Wolff tells the inside storyof the most controversial presidency of our timeThe first nine months of Donald Trump’s term were stormy, outrageous―and absolutely mesmerizing. Now, thanks to his deep access to the West Wing, bestselling author Michael Wolff tells the riveting story of how Trump launched a tenure as volatile and fiery as the man himself.In this explosive book, Wolff provides a wealth of new details about the chaos in the Oval Office. Among the revelations: -- What President Trump’s staff really thinks of him-- What inspired Trump to claim he was wire-tapped by President Obama -- Why FBI director James Comey was really fired-- Why chief strategist Steve Bannon and Trump’s son-in-law Jared Kushner couldn’t be in the same room -- Who is really directing the Trump administration’s strategy in the wake of Bannon’s firing-- What the secret to communicating with Trump is-- What the Trump administration has in common with the movie The ProducersNever before has a presidency so divided the American people. Brilliantly reported and astoundingly fresh, Michael Wolff’s Fire and Fury shows us how and why Donald Trump has become the king of discord and disunion.

@rodhilton
Reviewed: 2019-09-02
The day I finished this book, I opened up my computer and saw that Hope Hicks, a "character" who is central to a good portion of this book, resigned. The day before, Jared Kushner - who is mentioned on nearly every page - had his security level downgraded. The Mueller investigation is still ongoing, and the future of Trump's presidency is very uncertain.

The reason I mention all of this is that the fundamental issue with the book is that, frankly, it was written too early. It's the first section of a nonexistent book called "The Downfall of the Trump White House." It feels incomplete, like the book ends when stuff is just getting warmed up, and the book would be stronger if it was written in the aftermath of Trump, or at least when the Russia investigations (which take up about half the book as-is) are completed. Narratively, it's unsatisfying to just end the book abruptly in the middle of all of these insane goings-on. I realize that Michael Wolff basically had this info and could sell a lot of copies of the book in the heat of the presidency rather than in the aftermath of it, but it just seems woefully incomplete.

Overall it's a good read - a bit rambly at times and of course I have no way to verify how accurate it all is, but it's definitely an enlightening account of this accidental president. Worth reading, I hope there's a sequel when these 4 years are up.
@sjstevenson
Reviewed: 2019-06-11

Finally got around to reading this, which I had been anxious to do since it was released. I thought it might just be a rehash of all the chaos that has been reported on an almost daily basis since Trump was elected, but it was much more than that. Michael Wolff's behind-the-scenes view of all the goings on in the White House had a great deal more detail as to the what and why of the actions of the White House, particularly the revolving door of Trump appointees coming and going. And the portrayal of Donald Trump as childish, uninformed and lacking any sign of intelligence just makes me more fearful for the direction of this country with the present administration. It was a very interesting read, I certainly hope that Michael Wolff does a follow-up as to the administration after the first nine months (which is covered in this book). But I would assume now his ability to be to close to the action is pretty much done. Our loss.

Abandoned because it made me to angry to read, also it was super dull.

Quite a remarkable book in many ways. The author clearly had SOME access to the White House which, on his past form (and the likely outcome), it's extraordinary that they even let him in the front door. Normally, given the book's pre-publicity, I would shy away from Kitty Kelley/Anthony Grey-like treatments, but Donald Trump really is out on his own. For any other president during my life-time, I would only likely believe about 10% of the 'revelations', but having read Trump's tweets for the last 12 months and seen any number of clips on TV, I wouldn't bet that Wolff is too far off the mark. Wolff writes well but it does tend to get a bit repetitive and, overall, doesn't reveal that much more than you would have gleaned from other publications. Wolff's take on the alleged Russian collusion is quite interesting however: not so much that they were up to no good, more that the players are simply incompetent. It really is the gang that couldn't shoot straight, run by a person wholly unsuited for the role. Just as I was about to read the last chapter, I saw some old footage of the Fox interview with Trump in the aftermath of the US bombing of Iraq ... oops, Syria. Horrifying and, if nothing else, again gives weight to Wolff's 'observations'. The scary thing is that Trump winning the lottery could leave us all the poorer.