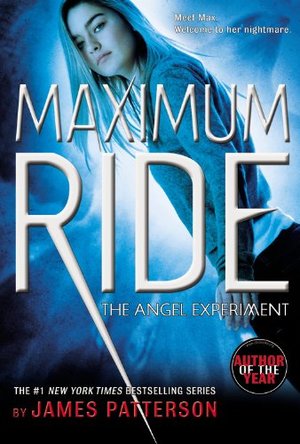 James Patterson
In James Patterson's blockbuster series, fourteen-year-old Maximum Ride, better known as Max, knows what it's like to soar above the world. She and all the members of the "flock"--Fang, Iggy, Nudge, Gasman and Angel--are just like ordinary kids--only they have wings and can fly. It may seem like a dream come true to some, but their lives can morph into a living nightmare at any time...like when Angel, the youngest member of the flock, is kidnapped and taken back to the "School" where she and the others were experimented on by a crew of wack jobs. Her friends brave a journey to blazing hot Death Valley, CA, to save Angel, but soon enough, they find themselves in yet another nightmare--this one involving fighting off the half-human, half-wolf "Erasers" in New York City. Whether in the treetops of Central Park or in the bowels of the Manhattan subway system, Max and her adopted family take the ride of their lives. Along the way Max discovers from her old friend and father-figure Jeb--now her betrayed and greatest enemy--that her purpose is save the world--but can she?

I do not quite know where to begin.

How about we begin on a positive note?

I enjoyed finding out that Max was a girl. I do love when authors deliberately choose to have their characters, of any gender, break asinine, dichotomous gender norms. -- Conversely, he also made her the "mother" of the group. The 14 year old girl with parental issues looking after other children and/or boys? Clearly his choice of a typically masculine name for her didn't mean he would write a character that broke through socialized gender norms in any other way.

The chapter layouts were nearly insulting to their targeted audience. As if teenagers don't have attention spans to get them through more than three pages at a time? I understand you don't have to be the 21st century's Bard, but Lemony Snicket, C.S. Lewis, and J.K. Rowling (to name a small few) seemed to do just fine. Not to mention, their demographics were among the same age range, if not younger, than that of Patterson and consisted of infinitely better character development/arcs, plot execution, elocution, and so on.

How he managed to squeeze out another 8 novels after this, I will never understand.

Honestly, as a woman, I am insulted. This is a book advertised as empowering young women to embrace their strength, when in reality this is just as simplistic, generic, and sexist as pretty much any other book that has ever been written.

One might as well lump this guy in with D. H Lawrence, since both of them seem so intent on crafting women for their own pleasures, regardless of how actual women really feel or think. Granted, Patterson wasn't as corporeally libidinous and pornographic in his approach as Lawrence was. This still doesn't change or negate the fact that he wrote a two-dimensional female character from the privileged perspective of a white, hetero, cis male. He used a played out, flat, vapid, formulaic approach to pump out a few books in order for his own monetary gain.

This book has little to no substance whatsoever.

I wouldn't call it a waste of trees, necessarily. I do not believe in media censorship and I believe every person should read whatever fills them with joy. -- But I think it is immensely important to know what you are getting into when you pick up a book and to know what place the author is coming from when he/she/they wrote their piece. One of the greatest dangers our society regular faces is people's the tendency to treat figures of great understanding and status in certain areas transversely as authorities of the same degree in others. For example, just because someone is an amazing lawyer and has the ability to argue well, does not mean they should be able to dictate which scientific studies should receive the most funding (For more about this particular issue, I'd recommend S.L. Otto's "Fool Me Twice").

I am sure Patterson has, in some ways, earned the awards he has won. I am sure not all of his works are inadequate. -- But I certainly do not believe this 60 year old white man knows very much about the mind of a teenage girl and the problems we readily face growing up. This novel demonstrates this deficiency rather well.