Who Could That Be at This Hour? (All the Wrong Questions) 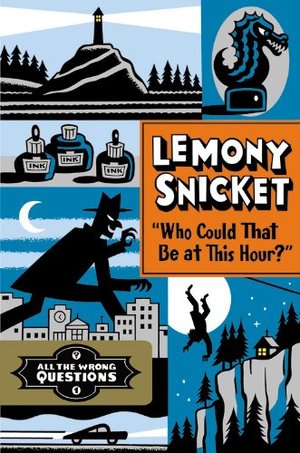 Lemony Snicket
In a fading town, far from anyone he knew or trusted, a young Lemony Snicket began his apprenticeship in an organization nobody knows about. He started by asking questions that shouldn't have been on his mind. Now he has written an account that should not be published, in four volumes that shouldn't be read. This is the first volume.

Have you read a series of unfortunate events? 'Cause in my opinion the author has a rather special way of telling his stories and you either like it or dislike it. In ASOUE Lemony Snicket was the one telling the story of the Baudelaire siblings, but in all the wrong questions he himself is the main character. This was totally my cup of tea, because I always liked Mr Snicket when he told the tales of the Baudelaires. Having him as the main character warmed my heart.

I completely fell for him as a character 'cause he has this rather sassy humor and a sassy, a little bit of know-it-all way of answering. He's smart, but makes mistakes. He feels human, because of his imperfection. The author also gave him a lot of background that you immediately want to discover and know. There are other great characters, but I don't want to go into too many details about them 'cause it could be a spoiler. Everyone has to learn about them for themselves, I guess. Of course there are also the rather typical Lemony Snicket characters that are rather dumb and never realize what's actually going on, but I love those kind of characters in his stories. Sometimes they leave you a bit frustrated, but you don't get really mad. I always think it's amusing. Lemony Snickets books are the only ones that manage to do this to me.

The story for itself is interesting and I tried to solve the whole mystery on my own just to realize that (like Lemony did too) I missed out on something important. Or I learnt a new fact, because you never know everything. I'm really curious about the things that are still to come and hopefully I'll find time to read the other two books soon. Like ASOUE it ends with a lot of questions and no answers. I just hope the last book won't end like this, too. There are so many characters that seem to have some really interesting background stories. They have a depth I haven't seen in a long long time.

I thought about rating Who could that be at this hour? with four stars, but decided that I can’t always use it. It actually is a 3.5 ranking to me, but that’s not possible here. I also have to admit that I’m a bit biased when it comes to Lemony Snicket, because I absolutely loved ASOUE and the first book of the ATWQ series gave me the exact same feeling. It was as if I returned home to find out more about a world I lived in once before.