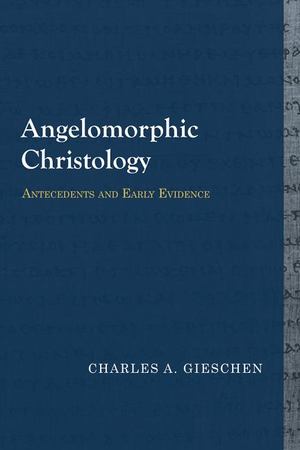 Charles A. Gieschen
Charles Gieschen demonstrates that angel and angel-related traditions, especially those built upon the so-called "Angel of the Lord" figure in the Hebrew Bible, had a profound impact upon the origin, development, and shape of early Christian claims about Jesus. Gieschen's book falls neatly into two halves. The first catalogues the various antecedents for Angelomorphic Christology -- Jewish speculation about principal angels, mediator figures, and related phenomena -- with chapters on An Angelomorphic God, Angelomorphic Divine Hypostases (including the Divine Name, the Divine Glory, Wisdom, the Word, the Spirit and Power), Principal Named Angels, and Angelomorphic Humans. The book's second half examines the evidence for Angelomorphic Christology in early Christian literature. This portion begins with a brief overview of the principal Angel and Angelomorphic Christology from Justin to Nicea and then examines in turn the Pseudo-Clementines, the Shepherd of Hermas, the Ascension of Isaiah, the Revelation of John, the Fourth Gospel, the Epistle to the Hebrews, and the Pauline Corpus. Gieschen argues that Christian use of the angelomorphic tradition did not spawn a new and variant kind of Christology, one that competed with accepted belief about Jesus for early Christians' favour, but instead shows how Christians adapted an already variegated Jewish tradition to weave a single story about a common Lord.