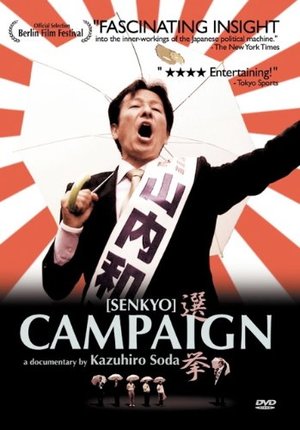 Can a candidate with no political experience and no charisma win an election if he is backed by the political giant Prime Minister Koizumi and his Liberal Democratic Party? This Peabody winning popular observational documentary closely follows a heated election campaign in Kawasaki, Japan, revealing the true nature of "democracy."In the fall of 2005, 40-year-old, self-employed Kazuhiko "Yama-san" Yamauchi's peaceful, humdrum life was turned upside-down. Japanese Prime Minister Junichiro Koizumi's Liberal Democratic Party (LDP) had suddenly chosen him as its official candidate to run for a vacant seat on the Kawasaki city council. Yama-san had zero experience in politics, no charisma, no supporters, no constituency, and no time to prepare for the impending election. The election was critical for the LDP. Yama-san's loss would automatically oust the LDP from its position as the dominant political party on the council. Thus, the LDP forms a strong campaign team consisting of every LDP politician from the Kawasaki region to fight the intense battle against the party's opponents-all veterans of the Democratic Party, the Communist Party, and the Kanagawa Network. The campaign team invites many of the LDP's political big shots-Nobuteru Ishihara, Yoriko Kawaguchi, and even Prime Minister Koizumi himself-to back its inexperienced candidate-a rare sight for an election in a politically insignificant suburban town. Adhering to the campaign tactic of "bowing to everybody, even to telephone poles," Yama-san visits local festivals, kindergarten sports events, senior gatherings, commuter train stations, and even bus stops to offer his hand to every one he sees.