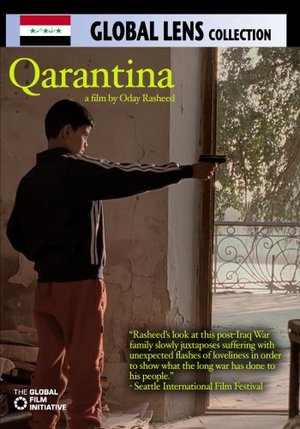 Oday Rasheed
Qarantina (Amazon.com Exclusive) A broken family under an incestuous patriarch lives uneasily within the gated courtyard of a dilapidated Baghdad house. The pregnant daughter has fallen silent, finding some protection from the patriarch's young second wife and his preteen son. Meanwhile, hard up for money, the household must live with a sullen and imperious boarder, a contract killer. In such a house, though, it may be that freedom and safety actually lie beyond the gates.Iraqi filmmaker Oday Rasheed's second feature gorgeously captures contemporary Baghdad's moody interior and stunned atmosphere, echoed in performances by a formidable cast who suggest unexpected resilience in the wake of catastrophe."The entire film is suffused with an aura of waiting, furthering a strong impression that the characters' inability to move on is indicative of Iraq as a whole. Thankfully, the helmer avoids pushing the symbolism into something abstract, even when it becomes clear the home where most of the action takes place is a microcosm of the country...Where so much coming out of Iraq ends on a note of gloom, "Qarantina" offers hope of escape not from the country, but from the cycle of violence." –Variety"Rasheed's look at this post-Iraq-war family slowly juxtaposes suffering with unexpected flashes of loveliness in order to show what the long war has done to his people." –Seattle International Film FestivalQarantina is an official selection of the prestigious, award-winning Global Lens Collection presented by the Global Film Initiative. In Arabic with English subtitles.When sold by Amazon.com, this product will be manufactured on demand using DVD-R recordable media. Amazon.com's standard return policy will apply.