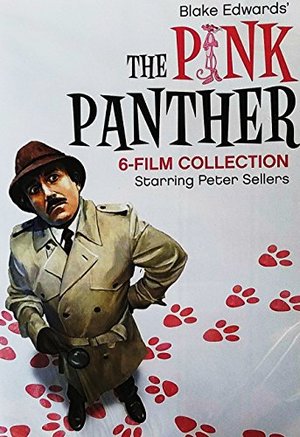 Blake Edwards
Get ready for non-stop laughs as the great Peter Sellers plays his most beloved character, inspector Jacques Clouseau, in these six films from writer/director Blake Edwards! 'The Pink Panther': This "delightful caper comedy" follows the world's most inept, incapable and incredibly funny detective, Inspector Clouseau as he sets out to protect a princess and her rare gem known as "the Pink Panther!". 'A Shot in the Dark': The French have a word for a man like Clouseau: Idiot! Across Paris, baffled citizens want to know if the inspector is in hot pursuit of a criminal...or just in love with one. When he falls for the beautiful prime suspect of a murder case, Clouseau had better solve his dilemma quickly, or his career will be finit in this sequel! 'Return of the Pink Panther': The priceless Pink Panther jewel is stolen a second time and Clouseau must unleash his preposterous reasoning, outlandish disguises and indecipherable pronunciation as he tracks a wily thief known as the Phantom! 'The Pink Panther Strikes Again': Clouseau's boss, finally driven mad by his incompetence, commandeers a doomsday device and demands the inspector's death! 'Revenge of the Pink Panther': In this hilarious outing, the world believes that Clouseau is dead! As his former boss reads his eulogy with tears in his eyes (from attempting to suppress his glee), the very-much-alive Clouseau dons another of his "masterful" disguises and heads to Hong Kong to investigate a drug ring! 'Trail of the Pink Panther': Clouseau is MIA in this wild adventure and when his plane is reported missing, a reporter attempts to memorialize the lovable buffoon by rounding up the usual suspects!