Children of Blood and Bone (Legacy of Orisha) 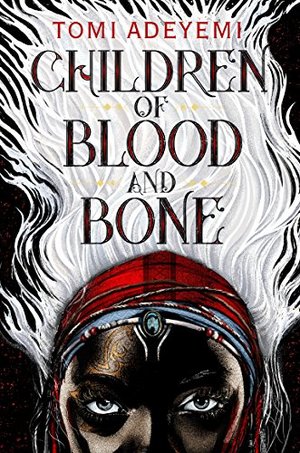 Tomi Adeyemi
Tomi Adeyemi conjures a stunning world of dark magic and danger in her West African-inspired fantasy debut, perfect for fans of Leigh Bardugo and Sabaa Tahir.They killed my mother.They took our magic.They tried to bury us. Now we rise.Zélie Adebola remembers when the soil of Orïsha hummed with magic. Burners ignited flames, Tiders beckoned waves, and Zélie’s Reaper mother summoned forth souls.But everything changed the night magic disappeared. Under the orders of a ruthless king, maji were killed, leaving Zélie without a mother and her people without hope.Now Zélie has one chance to bring back magic and strike against the monarchy. With the help of a rogue princess, Zélie must outwit and outrun the crown prince, who is hell-bent on eradicating magic for good. Danger lurks in Orïsha, where snow leoponaires prowl and vengeful spirits wait in the waters. Yet the greatest danger may be Zélie herself as she struggles to control her powers―and her growing feelings for an enemy."Twenty-four-year-old Tomi Adeyemi’s YA debut is looking like a phenomenon." ―Entertainment Weekly“The next big thing in literature and film.”―Ebony“One of the biggest young adult fiction debut book deals of the year. Aside from a compelling plot and a strong-willed heroine as the protagonist, the book deals with larger themes, like race and power, that are being discussed in real time.”―Teen Vogue“A remarkable achievement.”―Campus Lately“Tomi Adeyemi is about to take both the literature and film world by storm.”―Jet

@kirbyb
Reviewed: 2021-02-04
4.10
@azidearest
Reviewed: 2018-07-24
Wow! This is one book that has it all. The plot was well-paced and intriguing. I understood the dilemma faced by the main character later in the book, wondered how on earth there would be an answer, and was still surprised by the twist. :) Yet, this book was not all plot with no substance. The characters feel so incredibly real! And their histories, their conflicts, their emotions all feel just as real. That's probably because, if you take away the magic part, their lives ARE real. Real people have been through these atrocities... and committed these atrocities. The only difference is that in this book it's the characters' magic that makes them a hated/feared "other" instead of their skin color, their sexuality, their religion/culture, etc.
@themurtis
Reviewed: 2018-04-20

When a book lives up to all of its hype it is an incredible thing.

Based on the folklore of Yoruba, COBAB follows three teenagers from Orïsha, a land that was once flourished with magic. The writing in this book is absolutely astounding. I can not yell enough about it. The pacing is fantastic. Every time I felt the book was starting to slow, it quickly picked back up again. There are so many fantastic individual scenes - from the dreamscapes to the origin mural, to the fighting and running scenes! So many goodies! At over 500 pages, the book never felt long.

"I teach you to be warriors in the garden so you will never be gardeners in the war. I give you the strength to fight, but you all must learn the strength of restraint."

The world-building is phenomenal! The present-day story addresses so many tough issues, from slavery to racial discrimination, from privilege to power. The issues are raw and not skimmed over. You will hurt with the characters and you will roar with the motivation they have to change their present day.

I really want to stress the awesomeness of everything this book addresses. It is rare to see such topics so deeply and intimately addressed in a fantasy story. And not only does Adeyemi bring it to the forefront, she will make you feel the anguish and the anger. (Please read the author's note for this book! It is so so important and proof that this book is so much more than a gorgeously produced fictional tale.)

In addition, the backstory is incredible. The tales of a land filled with magic, the intimate connection Maji had with the Gods and the Sky Mother, the story of those who were gifted to protect these connections. It is gorgeous and majestic.

Oh, and did I mention that everyone gets to ride giant felines?

"No matter what the world said, my magic was beautiful. Even with without powers, the gods had blessed me with a gift"

And the characters! It is rare for me to love each and every character in a book. Every single person in this story is rich and complex and ridiculously well written.

The girls and women are all fierce and powerful and fight for what they truly believe in. The men are protective and thoughtful and strong in their will and their emotions. Even Inan, the token 'bad guy' has his own complexities and you will grow to know him in a way that antagonists often aren't.

Then there is the romance. Originally it threw me and even disappointed me in its inclusion. But I'll be honest, it didn't take long for me to change my mind. For one, the romance is written in the most beautiful way possible. It is intimate and complex and raw. It does not feel cliche once you get to explore it. And it is certainly not an easy-instalove type situation.

“Reality told us we would fail. But again and again, we fought. We persevered. We rose.”

There is something fantastic about this book. Adeyemi's writing is absolutely sensational. There is a story so much deeper hidden in these pages that I cheer for and hold close. If you have not read this story yet you are missing out on something truly magical.