#1 A Discovery of Witches 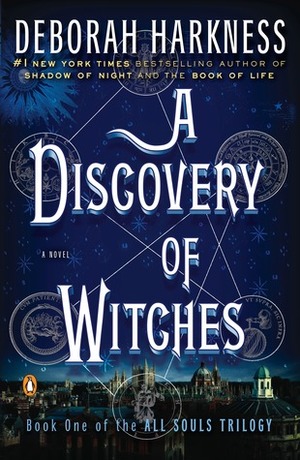 Deborah Harkness
Book one of the New York Times–bestselling All Souls trilogy—"a wonderfully imaginative grown-up fantasy with all the magic of Harry Potter and Twilight” (People) Deborah Harkness’s sparkling debut, A Discovery of Witches, has brought her into the spotlight and galvanized fans around the world. In this tale of passion and obsession, Diana Bishop, a young scholar and a descendant of witches, discovers a long-lost and enchanted alchemical manuscript, Ashmole 782, deep in Oxford's Bodleian Library. Its reappearance summons a fantastical underworld, which she navigates with her leading man, vampire geneticist Matthew Clairmont. Harkness has created a universe to rival those of Anne Rice, Diana Gabaldon, and Elizabeth Kostova, and she adds a scholar's depth to this riveting tale of magic and suspense. The story continues in book two, Shadow of Night, and concludes with The Book of Life, coming from Viking in July 2014.

@govmarley
Reviewed: 2015-11-28
Second read-through of the book. *Disclaimer: I like my book relationships to be very different from my real-life marriage. If my husband tried controlling me like Matthew does with Diana, I'd punch him in the face, then walk away. But since it's a fantasy, I'll allow it.

This book has a lot going on. Vampires, witches, magical manuscripts, time-travel, haunted houses, and daemons. Not my usual fare, to be sure. I rarely, if ever, read paranormal romance. But I love historical fiction and I like the way Harkness weaves in historical facts to her story about Matthew and Diana. Diana is a scholar who stumbles upon an enchanted manuscript during her research. She's also a very reluctant witch, daughter of two very powerful witches, who avoids using her powers at all costs. Matthew is a brooding millionaire vampire scientist, who spends his time researching blood and DNA with his vampire assistants in his lab. He also does yoga and has a castle. In France. With horses and a library. Hey, if he offered me a free trip to his castle, I might let him boss me around for a while, too. As long as I got time to read by the fire and ride his horses. But I digress.

Diana unknowingly triggers many magical creatures when she has the manuscript called from the stacks. She's in danger and Matthew's hero complex goes into complete overdrive to protect her. And possibly eat her, because she smells good. But not right now. He's a good vampire! Very self-controlled. While I rate it a solid three stars, what kept it from being rated higher was Diana. She desperately needs to grow some confidence. She's supposed to be an intelligent, Yale-educated woman at Oxford, for crying out loud. Make good choices and stand on your own two feet! She's my biggest nitpick with the story. It's a little like Twilight for adults, but not in a bad way. It's smarter and more complex. I liked it, flaws and all.
Item Posts
No posts
© 2021 libib.com / All rights reserved