Russian Roulette: The Inside Story of Putin's War on America and the Election of Donald Trump 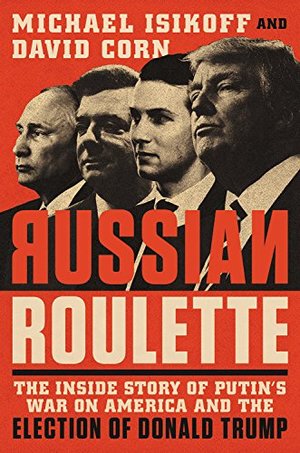 Michael Isikoff, David Corn
The incredible, harrowing account of how American democracy was hacked by Moscow as part of a covert operation to influence the U.S. election and help Donald Trump gain the presidency. p.p1 {margin: 0.0px 0.0px 0.0px 0.0px; font: 12.0px Arial} p.p2 {margin: 0.0px 0.0px 0.0px 0.0px; text-indent: 36.0px; font: 12.0px Arial} RUSSIAN ROULETTE is a story of political skullduggery unprecedented in American history. It weaves together tales of international intrigue, cyber espionage, and superpower rivalry. After U.S.-Russia relations soured, as Vladimir Putin moved to reassert Russian strength on the global stage, Moscow trained its best hackers and trolls on U.S. political targets and exploited WikiLeaks to disseminate information that could affect the 2016 election.The Russians were wildly successful and the great break-in of 2016 was no "third-rate burglary." It was far more sophisticated and sinister -- a brazen act of political espionage designed to interfere with American democracy. At the end of the day, Trump, the candidate who pursued business deals in Russia, won. And millions of Americans were left wondering, what the hell happened? This story of high-tech spying and multiple political feuds is told against the backdrop of Trump's strange relationship with Putin and the curious ties between members of his inner circle -- including Paul Manafort and Michael Flynn -- and Russia.RUSSIAN ROULETTE chronicles and explores this bizarre scandal, explains the stakes, and answers one of the biggest questions in American politics: How and why did a foreign government infiltrate the country's political process and gain influence in Washington?