Undercurrents: From Oceanographer to University President 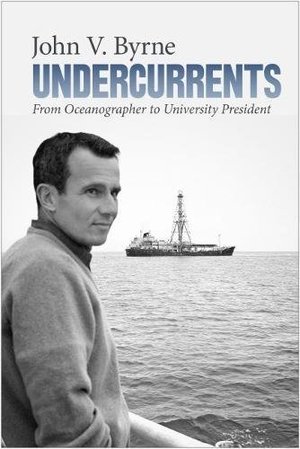 Byrne, John
Undercurrents recounts the life and career of John Byrne, who started as a geologist at an oil company and retired as president of a major land grant university. He came to Oregon State in 1960 as a faculty member, later becoming department chair, dean, director of the Hatfield Marine Science Center, and vice president for Research and Graduate Studies. Along the way, he took leave from the university to serve the US government, first as a program director for oceanography at the National Science Foundation, and later as the administrator of the National Oceanic and Atmospheric Administration, before returning to OSU in 1984 as its twelfth president. As president of OSU, John Byrne used the lessons learned in industry and government to guide the university through a period of turbulence caused by severe state budget restrictions. During this period of economic contraction, OSU continued under Byrne’s leadership to grow in programs, facilities, and external funding. Byrne was one of the first to introduce Total Quality Management techniques to higher education. He emphasized the importance of international education and was a supporter of significant academic reform in higher education. While focusing on his professional career, Byrne’s memoir also shares personal stories of a childhood and youth shaped by the Great Depression and World War II. Undercurrents demonstrates on every page the curiosity, intellect, and humanity that made John Byrne successful as a scientist, educator, and administrator. Anyone pursuing a career in science or academia, and anyone interested in the history and legacy of land grant universities will welcome this richly detailed and warmly written account of Byrne’s career.