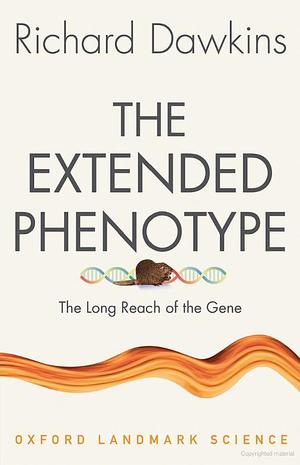 Richard Dawkins
In The Selfish Gene, Richard Dawkins crystallized the gene's eye view of evolution developed by W.D. Hamilton and others. The book provoked widespread and heated debate. Written in part as a response, The Extended Phenotype gave a deeper clarification of the central concept of the gene as theunit of selection; but it did much more besides. In it, Dawkins extended the gene's eye view to argue that the genes that sit within an organism have an influence that reaches out beyond the visible traits in that body - the phenotype - to the wider environment, which can include other individuals.So, for instance, the genes of the beaver drive it to gather twigs to produce the substantial physical structure of a dam; and the genes of the cuckoo chick produce effects that manipulate the behaviour of the host bird, making it nurture the intruder as one of its own. This notion of the extendedphenotype has proved to be highly influential in the way we understand evolution and the natural world. It represents a key scientific contribution to evolutionary biology, and it continues to play an important role in research in the life sciences.The Extended Phenotype is a conceptually deep book that forms important reading for biologists and students. But Dawkins' clear exposition is accessible to all who are prepared to put in a little effort.Oxford Landmark Science books are 'must-read' classics of modern science writing which have crystallized big ideas, and shaped the way we think.