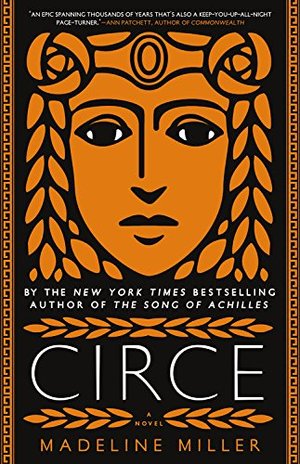 Madeline Miller
The daring, dazzling and highly anticipated follow-up to the New York Times bestseller The Song of AchillesOne of the Most Anticipated Books of 2018"An epic spanning thousands of years that's also a keep-you-up-all-night page turner." - Ann PatchettIn the house of Helios, god of the sun and mightiest of the Titans, a daughter is born. But Circe is a strange child--not powerful, like her father, nor viciously alluring like her mother. Turning to the world of mortals for companionship, she discovers that she does possess power--the power of witchcraft, which can transform rivals into monsters and menace the gods themselves.Threatened, Zeus banishes her to a deserted island, where she hones her occult craft, tames wild beasts and crosses paths with many of the most famous figures in all of mythology, including the Minotaur, Daedalus and his doomed son Icarus, the murderous Medea, and, of course, wily Odysseus.But there is danger, too, for a woman who stands alone, and Circe unwittingly draws the wrath of both men and gods, ultimately finding herself pitted against one of the most terrifying and vengeful of the Olympians. To protect what she loves most, Circe must summon all her strength and choose, once and for all, whether she belongs with the gods she is born from, or the mortals she has come to love.With unforgettably vivid characters, mesmerizing language and page-turning suspense, Circe is a triumph of storytelling, an intoxicating epic of family rivalry, palace intrigue, love and loss, as well as a celebration of indomitable female strength in a man's world.

@jordanmbutler
Reviewed: 2020-03-25
This is really the only time I’ve dipped my toe into anything related to mythology. I couldn’t resist given the rave reviews I read at every turn about this novel. I loved it. A great tale with just enough detail about mythology to be very interesting, but not so much to weight down the tale or bore the reader. Great characters and more variety in adventures than I anticipated. Very glad I read this!
@chexala
Reviewed: 2019-07-15
Circe was everything I want in a mythic retelling. Beautiful, subtle writing with a dry wit; deep, loving knowledge of the myths that adds new flavor to the stories without twisting them beyond recognition.
I found this book to be perfect.
@shhsduffy
Reviewed: 2019-06-21

I really liked this book a lot.  I learned a lot of interesting things about the genealogy of Circe, a figure who is prominent in the Odyssey, but who is also sidelined by the title hero himself.  I had no idea, even after having taught the Odyssey for a number of years, that Circe herself created Scylla.  The backstory that re-entwines Odysseus and his descendants with Circe was intriguing, and I thought that this portrait of the sorceress really rounded out and filled in her motivations as they are left out of Homer's text.

I do love the retelling of old historical tales with some twists thrown in, and Circe was as good as it gets with that. I wasn't aware how vital her character was in many Greek myths and it was awesome to read it in one continuous flow.

@fourfreedoms
Reviewed: 2019-05-17
This was a very engaging book that kept my attention all the way through, and does a fantastic job of bringing all the Greek mix to life. I particularly like her use of the concept of quote Monsters are a boon to gods. Imagine all the prayers." A very well spun set of stories.
@ellamc
Reviewed: 2019-04-21

The reading of this book felt effortless, which is harder to do than you might think, and I applaud Miller for her prose. However, Circe herself says at one point that Nymphs like herself are never allowed to act except through others (usually men), and she never really proves herself wrong; the book ends when she finds the right man.

@chexala
Reviewed: 2018-10-28
Circe was everything I want in a mythic retelling. Beautiful, subtle writing with a dry wit; deep, loving knowledge of the myths that adds new flavor to the stories without twisting them beyond recognition.
I found this book to be perfect.
@pixielesher
Reviewed: 2018-07-30

The last time I read any Greek mythology was in high school, when I was introduced to Homer. And I'm more familiar with the Roman names for the Gods so it took me a bit to get used to the names and get familiar with the locations.

The book opens with Circe's parents' meeting and her birth. Then the years of her living with the Titans. I found this a bit boring, only because there were so many feasts, so many power games being played. Once Circe starts out on her own and especially when she is exiled to Aiaia the action actually picks up a bit. (Which does seem odd since she's supposed to be in exile.) But Circe finding herself alone on her island and how she becomes the woman she becomes is perhaps the most interesting aspect of this book. Plus, I've always loved the fact that she turned men into pigs.

It's an interesting book and one I'd recommend if you're traveling or looking to travel via the comfort of your chair.