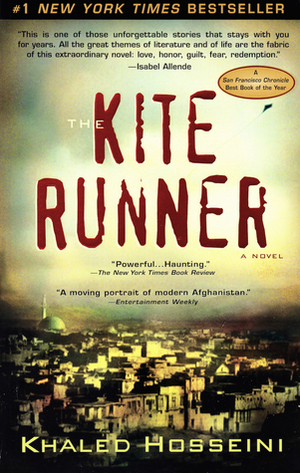 Khaled Hosseini
The unforgettable, heartbreaking story of the unlikely friendship between a wealthy boy and the son of his father's servant, The Kite Runner is a beautifully crafted novel set in a country that is in the process of being destroyed. It is about the power of reading, the price of betrayal, and the possibility of redemption; and an exploration of the power of fathers over sons, their love, their sacrifices, their lies. A sweeping story of family, love, and friendship told against the devastating backdrop of the history of Afghanistan over the last thirty years, The Kite Runner is an unusual and powerful novel that has become a beloved, one-of-a-kind classic.

@rascalbooks
Reviewed: 2020-08-03
UsedAcceptable
@maureenkeavy
Reviewed: 2020-01-04
I AM SO EMOTIONAL DON'T TOUCH ME. This story was beautiful and I learned so much from it and man. Just so good. I also read this for #diversathon (even though I'm finishing it about a week later) and I really feel like I learned so much about a culture that I really knew nothing about. It was eye opening and interesting and so educational. The characters were beautifully written and Amir was fantastically developed. Overall the plot was engaging though the pacing lacked at times. The message was beautiful and the ending made me cry. Read this book IT IS GREAT.
@aezell
Reviewed: 2019-05-08
Simply the most powerful and affecting novel I have read in the last 5 years, if not more. I was floored by its spare language and gut-wrenching scenes. It's beauty lies in its ability to be quiet when one expects loud and loud when one expects quiet.
@toadncat
Reviewed: 2019-01-15
Book group read -- More allegorical than I thought it would be. Parts were difficult to read, but overall I wanted to know what happened enough to read to the end.
@ashleynicholle
Reviewed: 2017-05-11

This book was a real eye-opener. As a child growing up in the post 9/11 world, I had only ever thought of Afghanistan and the rest of the Middle East as sandy deserts, already ravaged by the years and years of war. The Kite Runner made Afghanistan beautiful, some place you could be homesick for. This book made me see that the Middle East had a culture that was not just religion and war. Reading it was a turning point in many of my (family-influenced) political opinions; it huamanized the people of that region and immigrants. I would definitely recommend that everyone read this book.

Frequently on banned and challenged book lists, the Kite Runner is filled with violence, sexual situations, and extremely unlikeable characters. It's not a happy book. It's the story of an flawed, privileged boy growing up in pre-war Afghanistan who searches for forgiveness and redemption for the mistakes made in his youth. Some scenes were extremely difficult to read. Some scenes made me sad for the characters. Some scenes left me indigent to the violence in the world--the stadium scene specifically. It's a story about how secrets can shape our lives, and it's a story about relationships.