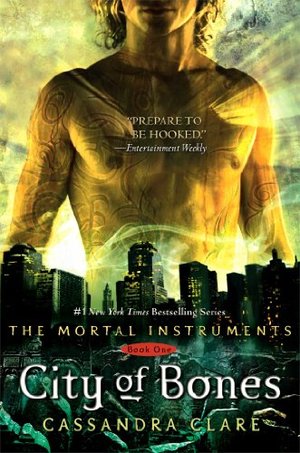 I gave this book 3 1/2 stars. (Come on Goodreads, make it so we can give half ratings)
It's not that it was bad, in fact, it was really close to 4 stars, but I just couldn't stand how slow it was.
The whole book wasn't slow, but there were so many parts that were, I couldn't stand it.
The world building was excellent and I am excited to see where it goes as the series goes on.
The character development was also pretty good. I liked that Clary got some guts. There's also a scene at the end with Alec that showed he had developed as a character as well, although almost dying might do that to a person. Who knows?
And speaking of the end....that twist though??? What the heck are you doing to me Cassandra Clare? Ruining my ships like that!! Can't wait to read book two!

@scaredofspiders
Reviewed: 2018-12-26
This was a page turner. I enjoyed it thoroughly. The author used a mechanic I had been expecting for half of the book but dreading thoroughly at the end. Still, I'm reading Vol.2, so it can't have ruined it totally.
@thejessleigh
Reviewed: 2018-07-20
Originally read in 2008. Reread in 2011 so I could understand what was going on in City of Glass and City of Fallen Angels.
@becandbones
Reviewed: 2018-03-22
This is one of those books

For me this book was a re-read and a buddy read. I re-read this book because I want to read the rest of the series and see what all the hype is about. I also wanted to divulge myself in a series world and why not start with one of the most well known and most talked about (and one that is still being published as we speak)?

The first time I read this book, I wasn't a fan. It seemed incredibly cliche and I hated the most infamous plot twist. I gave it 2 stars.

Despite knowing this I always like the idea of the Shadowhunter Chronicles and was willing to give it another shot with some friends. While I still found large parts of the book incredibly cliche (I am truly done with the best-friend-unrequited-love scenario) overall I enjoyed it. I have read a lot of YA books which I despised and possibly did not finish. But this was not one of them.

And I can't lie and say I hate the characters. I mean, how can you dislike Simon?!

Magnus Bane is still beyond any doubt my favourite character, Alec is someone I want to console, and even Isabelle I grew to like by the Epilogue.

Jace still frustrates the living hell out of me, and Clary never made my bad-ass-female-lead shelf and yet I have hope for them in the next few books.

By far, based on this book alone Clare has so much room to improve in her writing (did anyone else notice how many HOLES there were in the story line? Like when Clary feels a pain in her right arm but then later it's her left arm that is bleeding - apparently Clare's editors need some practice too). The crossovers my friends and I found between COB and Harry Potter and Twilight was ridiculous, I mean this book is seriously YA cliche.

And yet, for some reason (maybe the fact that the series is still going, maybe because there are SO many fans), I plan to keep going with the series and see where it goes.
@ruthsic
Reviewed: 2018-01-25
This was a re-read, partly because of the Shadowhunters show being aired now, and partly because I want to read the final book soon and want to catch up on all the story so far. So, comparing to the first read, I would say it is still as engaging. I missed my favorite sassy characters, and their witty quips at each other. There was a smile on my face whenever I came across a familiar line. What I didn't like was the narrator - the voice was too nasally, and even when trying for a 'guy voice' for the lines of the male characters, it made me cringe. The reading tone overall felt incomplete in emotion and flat in rendering. That was the only thing which darkened by enjoyment of this book again.
@colesmith92
Reviewed: 2018-01-14

In honor of the last book in cassandraclare’s first series The Mortal Instruments, I’ve decided to marathon the entire series so that I can get the full effect of the series and not forget the bits and pieces of the past books so that I can follow along in City of Heavenly Fire. Rereading the first book was a slight challenge because I had not reread a book in a long time, but since this is Cassandra Clare, I had no problem falling into the story and revisiting the initial firsts of everything! The way Clare describes the characters, scenery, action sequences, and the romance is just amazing! For a first novel, it was well written and she laid a lot of ground work to build on the rest of the series and even be able to expand the Shadowhunter universe, which she has already done with the Infernal Devices, which takes place in Victorian London. I always love a good story where a seemingly ordinary person is suddenly thrust into a setting where he or she must do and accomplish extraordinary things.

Clare’s writing is fluid as she switches dialog of the many well-developed characters. One of my favorite characters is Isabelle Lightwood because she is a girl that kicks some serious butt! I love that she uses an electrum whip as her main weapon of combat.

One of the things I also love about Clare’s novels is the integration of biblical references. I did not know that Nephilim were in the Bible. I loved how she weaved that biblical story throughout her novel and the use of runes, which are the magical tattoos that give the shadowhunter’s their many abilities.

One of the things that Clare has become known for throughout the many novels she’s written is the suspense, love triangles, and out wright surprises that readers get thrown for. I was not expecting the mess between Alec, Jace, Clary, and Simon. I was also not expecting the incest near the end of the novel! The first I read that part I was thinking “it can’t be true!”

@bookaddictguide
Reviewed: 2017-12-07
Hmm so I actually saw a lot of Harry Potter in this book! I really enjoyed it but I'm not 100% sure how much I liked the twists and turns it took. I felt like a little bit of paranormal overload sometimes, but really interested in the world of the Shadowhunters and I really want to learn more about how their whole world works. I enjoyed Clary's character, but most of all, I loved the sarcasm and the snark in the book! Definitely looking forward to reading more.

Full review originally posted on The Book Addict's Guide: Hmmm. I really enjoyed this book, but I still have somewhat of a mixed review! First, as a die hard Harry Potter fan, I couldn’t help but see sooo many similarities!

Totally not knocking it! I’m just saying that I couldn’t help but constantly see all the similarities!

Okay, so now more into the review. I really enjoyed the amount of sarcasm in the book. I love sarcasm and snarky and I think books need more of that nowadays! I loved Jace’s cocky attitude since it was cocky in a way that was humorous and not pretentious. I liked seeing Clary grow throughout the book and her developing friendships/relationships with Jace/Simon. What I wasn’t really a fan of was the secondary characters. I didn’t really see a whole lot in Isabelle or Alec and since it’s a series, I’m sure they’ll be more developed later on, but in this book, I didn’t really see the point so much.

As for the story — I don’t know. Maybe it’s just me, but sometimes I just get paranormal overload. Along with the Shadowhunters who fight the demons, there are still several (or tons, I should say) of “downworlders” who are other paranormals who came from a combination of angels/humans/demons, etc. Along with Shadowhunters, we have the demons, but then vampires, werewolves, pixies, faeries, selkies, and so many more. I was just overloaded with all of the paranormal beings and I’m not sure it was entirely necessary. Again – since it’s a series, that may play out later. We’ll have to see!

I really did like the development of how the Shadowhunter’s world works and all of the rules and practices. I’m hoping there’s a little bit more focus and development of this in future books because I’m really interested in learning more about this world, and I’m super anxious to see Clary find her place in it!

I felt like there were a little too many similes and metaphors for my taste. They all made sense — It wasn’t like it was random — But I feel like overuse of similes and metaphors takes away from writing rather than enhancing it. I was distracted by some of them, actually, instead of having them enhance the picture in my mind. I think part of the reason is because I get really vivid pictures in my head when I read the story and even if it’s not exactly what the author is thinking, I like to be able to paint my own picture. Sometimes they really distracted me from how I was picturing things.

Um, for all of those people who have already read this (I won’t spoil it for those who haven’t) – Let’s talk about this twist at the end. Does this have a better answer!? I was completely blown away (and maybe a little embarrassed that I didn’t see it coming…) but also weirded out. I’m not sure if I got turned off by it or really interested to see how that works out in the next book!