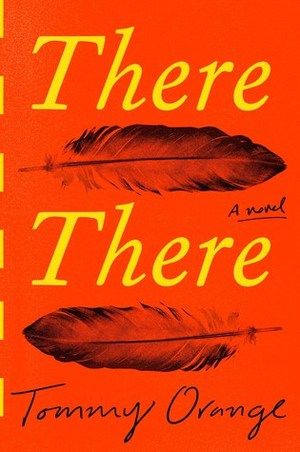 Tommy Orange
"Not since Sherman Alexie's The Lone Ranger and Tonto Fistfight in Heaven and Louise Erdrich's Love Medicine has such a powerful and urgent Native American voice exploded onto the landscape of contemporary fiction. Tommy Orange's There There introduces a brilliant new author at the start of a major career. "We all came to the powwow for different reasons. The messy, dangling threads of our lives got pulled into a braid--tied to the back of everything we'd been doing all along to get us here. There will be death and playing dead, there will be screams and unbearable silences, forever-silences, and a kind of time-travel, at the moment the gunshots start, when we look around and see ourselves as we are, in our regalia, and something in our blood will recoil then boil hot enough to burn through time and place and memory. We'll go back to where we came from, when we were people running from bullets at the end of that old world. The tragedy of it all will be unspeakable, that we've been fighting for decades to be recognized as a present-tense people, modern and relevant, only to die in the grass wearing feathers." Jacquie Red Feather is newly sober and trying to make it back to the family she left behind in shame in Oakland. Dene Oxedrene is pulling his life together after his uncle's death and has come to work the powwow and to honor his uncle's memory. Edwin Frank has come to find his true father. Bobby Big Medicine has come to drum the Grand Entry. Opal Viola Victoria Bear Shield has come to watch her nephew Orvil Red Feather; Orvil has taught himself Indian dance through YouTube videos, and he has come to the Big Oakland Powwow to dance in public for the very first time. Tony Loneman is a young Native American boy whose future seems destined to be as bleak as his past, and he has come to the Powwow with darker intentions--intentions that will destroy the lives of everyone in his path. Fierce, angry, funny, groundbreaking--Tommy Orange's first novel is a wondrous and shattering portrait of an America few of us have ever seen. There There is a multi-generational, relentlessly paced story about violence and recovery, hope and loss, identity and power, dislocation and communion, and the beauty and despair woven into the history of a nation and its people. A glorious, unforgettable debut"--

@mfeldma3
Reviewed: 2020-07-22
Devastating ending. With twelve main characters, I lost track of some threads that didn't weave together in the end, or wove loosely, and wished there was more time to get to know some of them.
@ralowe
Reviewed: 2020-05-21
childish gambino's *this is america* came out a month before the initial publication of tommy orange's *there there*. although these might be described as both artifacts appearing during a wave of racial justice cultural production rejecting the so-called post-racial era, the project of any kind of meaningful comparative analysis in this little dinky goodreads review can only be tentative. the one thing i can say is that gambino's supposed attempt at scrutinizing intramural/lateral violence was dragged for not portraying colonial precedent. vividly communicating this precedent comprises one of orange's strongest and inspired moments. also, orange engages indian stereotype not to reach across the aisle to a prospective white audience but to embark on an intimate and inspired intramural expression that creates entire worlds of anticolonial possibility, turning incipient voyeurism into something approaching sustenance for a community. this courage does get us in character portrayals that might skirt close to ableism and fatphobia; i don't like thinking of excuses for this. in another dodgy parallel it might be said that to whatever degree cormac mccarthy's conclusion to *blood meridian* might be construed as westward expansion's existential atonement, orange performs a reminiscent yet reversed sacrifice in *there there* at least twice maybe thrice with way more crushing intensity and heart. this book made me cry at least ten times. as someone who is annoyed with having to agree with cornel west on obama, it's doubly annoying to agree with obama on how good this book is.
@cariboukai
Reviewed: 2018-10-08

The description of this book starts with "fierce, angry, funny, heartbreaking". I never found the funny bits, but it has everything else in bulk. It's a terrible read, not due to poor writing, but because you know exactly how it's going to end from the vey beginning. Think of the movie "Moulin Rouge" but without the happy bits between start and end.

It made my heart ache, knowing there are real people, many of them, that are in the same situations presented in the story. This is not a happy book, but it's a story worth reading and mulling over long after finishing.

Hold onto your hats, readers! If this is what Tommy Orange writes for his debut, we have a major talent writing right now. My copy of There There arrived today. It's nearly 3 AM, and I just finished. No food, no sleep; I couldn't put this book down.

"This there there. He hadn’t read Gertrude Stein beyond the quote. But for Native people in this country, all over the Americas, it’s been developed over, buried ancestral land, glass and concrete and wire and steel, unreturnable covered memory. There is no there there."

That title gathers more meaning with every character, chapter and section. By the end the weight of not knowing exactly who you are or where you come from is a heavy weight even for a reader. All the characters have different experiences and difficulties, but they are all in search of connection to their own community, and none seem sure they belong to that community or if that community will allow them to belong to it. What is the character with an advanced degree in Native American Studies to do when he can't find a job? What about someone born with Fetal Alcohol Syndrome who wears his face as a constant reminder? What about native peoples who have to learn all of their heritage and how to practice it from YouTube or Google searches? Beyond poverty, unemployment, far too much alcoholism, there is death, devastation and a lot of shame in these characters. While they don't rise above in Hollywood ways, getting through the day - learning and growing and putting one foot in front of the other - while continuing to strive for that connection is pretty triumphant.

The characters are fully realized. We know why they do what they do, and we get a sense of how they feel about their current and past selves. It takes a minute but we understand their connections to each other better than they do by the end of the novel. We also get a sense of how these people came to be so broken from the proud nations that the Americas have systematically wiped out. What is most clear is that the bloodbath that came to America with the first settlers has left a never-ending trail of trauma. And in case we might miss it from just the stories, there's one of the best essays -- seemingly well-researched and certainly well-written that pulls no punches right in the beginning of the novel. While the characters don't escape unscathed, neither will a reader. In writing this so openly and leaving the sharp edges intact, Mr. Orange has held a mirror up to the Americas - whether the reader is indigenous or not.

There are many major characters in this novel, all in various stages of heading to the Oakland Powwow. While some have visited a Reservation, they are mostly urban or suburban and none seem fully connected to their Native culture. This isn't a reservation story or a historical account. These indigenous people live in the here and now, in the cities (mostly Oakland) and do all of the things everyone else in the city does, including riding the subway and not dressing up (except maybe on the day of the Powwow.) At first they don't seem to be related, but as the chapters and parts of the book move along, their connections become clear and that broke my heart even more. Missed connections, searching out parents or grandchildren you've never known, searching for yourself - all of these are explored and there are no pat answers. In fact, the book ends on one of the most wistful non-answers in recent memory. I love a book that refuses to put a pretty bow on top, and had Mr. Orange packaged the ending that way, everything that came before would have been cheapened.

What you get here is a journey, good stories, interesting characters, but no perfect answers. How could there be perfect answers to such a long history of carnage and stolen identity?