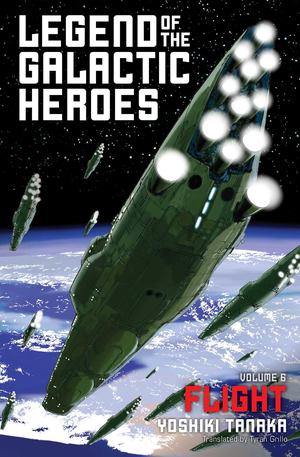 Yoshiki Tanaka, Tyran Grillo (Translator)
It's the Galactic Empire versus the Free Planets Alliance in Japan's greatest space opera epic! In the thirty-sixth century, humanity has conquered the galaxy and colonized countless star systems. The Galactic Empire, modeled along Prussian lines, and the democratic Free Planets Alliance are at war, and the fate of every human being in the universe hangs in the balance. This classic Japanese space opera, adapted into a legendary anime, is finally available in English for the first time. After donning the emperor's crown, Reinhard becomes aware of an assassination plot against him. Knowing that the Church of Terra has its scheming hands in all places, he deploys his troops to the church's sacred homeland of Terra. Meanwhile, Yang's leisurely retirement is tempered by the surveillance networks from both sides watching his every move. And when he is one day visited by a group of men dressed in black, the galaxy, too, relinquishes peace to become embroiled in upheaval once again. A massive ten-volume space opera epic; considered the greatest to come out of Japan.