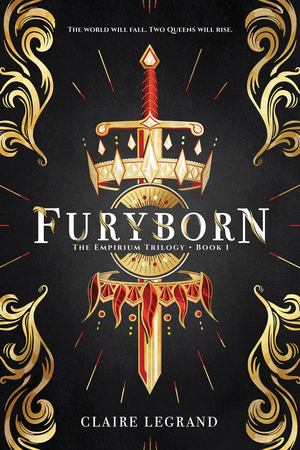 Claire Legrand
"Epic feminist fantasy."--Melissa Albert, New York Timesbestselling author "Truly not to be missed..."--Kendare Blake, #1 New York Timesbestselling author The stunningly original, must-read fantasy of 2018 follows two fiercely independent young women, centuries apart, who hold the power to save their world...or doom it. When assassins ambush herbest friend, Rielle Dardenne risks everything to save him, exposing herself as one of a pair of prophesied queens: a queen of light, and a queen of blood. To prove she is the Sun Queen, Rielle must endure seven elemental magic trials. If she fails, she will be executed...unless the trials kill her first. One thousand years later, the legend of Queen Rielle is a fairy tale to Eliana Ferracora. A bounty hunter for the Undying Empire, Eliana believes herself untouchable--until her mother vanishes. To find her, Eliana joins a rebel captain and discovers that the evil at the empire's heart is more terrible than she ever imagined. As Rielle and Eliana fight in a cosmic war that spans millennia, their stories intersect, and the shocking connections between them ultimately determine the fate of their world--and of each other.

@misszoot
Reviewed: 2022-01-02
I really enjoyed this one. It's really long and has a LOT of complex world building across two different timelines, which I normally struggle with, but once I re-read the first chapter around page 170 I was like, "OHHHHH. I THINK I GET IT NOW." I'm bad about skimming and sometimes it takes me awhile to understand foreshadowing etc because I skimmed the wrong things and don't remember. But once I re-read the first chapter I suddenly felt like I had a better grasp of the two different worlds and how they were connected. I'm a big fan of stories where good/evil are not clear separations - stories that allow humans and their histories to be complex and WOAH BOY this one definitely supports the idea that maybe good/evil is not so clear of a division in some people.

I'm very glad the other two books are already out in this series because I really want to continue it as there's still so much left to learn/understand.

NOTE: I have finished the Series and wanted to add a "Trilogy review" note at the end of this review. The Series was GREAT. I 100% recommend reading these books one right after another because there's so much world and character building it's easy to forget key bits along the way. I put a few months between the first and second and kept having to pull up a wiki to help me remember things. I was totally glad I stuck with it, however. Book 2 definitely was harder to follow with the separate timelines/voices but it all started to come together in Book 3 which I read in less than 24 hours it was sooooo good. I will definitely re-read this series some day.
@nocturnalace
Reviewed: 2018-10-30

Predictable story line, that's not to say that it was bad but the first book of this trilogy didnt have many surprising elements to it. The two stories that take place in this book were both enjoyable and well-written. Though I've never been a fan of books that change between past and present as normally I end up favoring one story above the other, I did enjoy the relations that I could find between both stories. At each chapter change, I found myself getting frustrated that I had to switch stories ONCE AGAIN and it seems that every chapter leaves you wanting more. Maybe that'd be a positive note for some but it really left me wanting to skip around the book even though I liked both stories.

My final thoughts are that althought the format of this book is not something I enjoy, I did enjoy the story and the writing and I will be continuing the series and I am excited to see what happnes next.