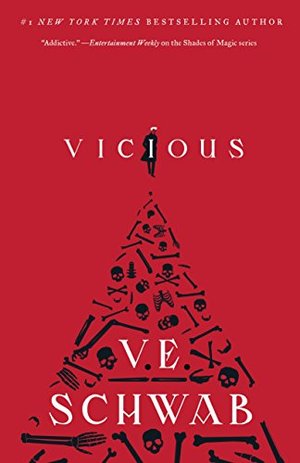 V. E. Schwab
A hardcover run-on repackage of New York Times bestseller V.E. Schwab's Vicious, a masterful tale of ambition, jealousy, and superpowers which will include:*A new cover by Wil Staehle, cover artist of the iconic Shades of Magic trilogy covers*Schwab's Tor.com short story set within the Vicious universe, "Warm Up"*A teaser for the upcoming sequel, VengefulVictor and Eli started out as college roommates―brilliant, arrogant, lonely boys who recognized the same sharpness and ambition in each other. In their senior year, a shared research interest in adrenaline, near-death experiences, and seemingly supernatural events reveals an intriguing possibility: that under the right conditions, someone could develop extraordinary abilities. But when their thesis moves from the academic to the experimental, things go horribly wrong.Ten years later, Victor breaks out of prison, determined to catch up to his old friend (now foe), aided by a young girl whose reserved nature obscures a stunning ability. Meanwhile, Eli is on a mission to eradicate every other super-powered person that he can find―aside from his sidekick, an enigmatic woman with an unbreakable will. Armed with terrible power on both sides, driven by the memory of betrayal and loss, the archnemeses have set a course for revenge―but who will be left alive at the end? In Vicious, V. E. Schwab brings to life a gritty comic-book-style world in vivid prose: a world where gaining superpowers doesn't automatically lead to heroism, and a time when allegiances are called into question."A dynamic and original twist on what it means to be a hero and a villain. A killer from page one…highly recommended!" ―Jonathan Maberry, New York Times bestselling author of Marvel Universe vs The Avengers and Patient Zero

An absolute page turner. I was engrossed from page 1 until I was done.

An absolute page turner. I was engrossed from page 1 until I was done.

I am finding it extremely difficult to come up with the right words to accurately describe just how much I adored this novel. I completed it well over a month ago and I am still constantly thinking about it. This was my first experience with Victoria Schwab’s work, and I was completely blown away by her talent. It has been quite a while since I was so quickly pulled into a novel. I found this incredibly hard to put down once I started reading; it’s one of those stories where you sit down to read a chapter or two and, before you know it, you’ve read a third of the book. This is due primarily to Schwab’s impressive abilities in character development and storytelling.

Vicious follows the story of two best friends turned archnemeses, with a narrative that jumps between the present day and their time in college together ten years prior. During their study of extraordinary abilities, things get out of control, landing Victor in prison, bent on getting revenge, and Eli attempting to wipe out every super-powered person in existence. In alternating time periods and perspectives, the story of their falling out is gradually filled in, and the mystery pieced together in a fast-paced and suspenseful way.

Victoria Schwab is an absolutely brilliant writer with an incredibly addicting writing style that flows beautifully. Her innovative ideas, particularly in the depiction of the super-human abilities, make a well-loved topic into a remarkable and unique reading experience. It is extremely difficult to base a story around villainous characters and requires major skill—which she clearly has—to do so. She is spot on with her level of detail and description when it comes to her world and character building, and she masterfully creates a dark, chilling mood and atmosphere all the way through. Her words, her details, her plot points, everything just flows so nicely.

Early on, I had my doubts about the way the novel jumped around in time so often. That is something I typically do not enjoy, as I have found that I tend to get lost and confused easily in books that skip around too much. However, this did not happen at all as I was reading this book, and I actually ended up loving the style. In general, this can be a rather dangerous and risky way to write a novel, but Schwab executes it perfectly and completely nails this method of storytelling.

Since the plot is so connected to the past and the history of the characters, being able to jump back and hear first-hand what happened to them definitely contributes a lot to the novel as a whole. Schwab does this in a way where she essentially creates two storylines—a past one and a present one—and the jumping between them alternately causes tension and suspense in both. There is also plenty of suspense within each chapter to boot. All of this really succeeds in fully immersing the reader in the story and making them want to read on.

The character creation and development is one of the strongest and most important aspects of this novel, and is definitely some of the best I have ever come across. This is not your typical tale of good versus evil—in fact, what makes this story so intriguing is the lack of clarity and specificity when it comes to the definitions of both. It is a novel about villains, revenge, and the dangers of extreme power. The characterization relies heavily on moral ambiguity, and no one is truly heroic in the traditional sense of the word; there is typically an ulterior motive behind each character’s actions.

Schwab works hard to create vivid and complex characters, and she presents the reader with a comprehensive portrayal of every single one. This is one of my personal favorite elements to see in a story. Clearly displaying a character’s good qualities as well as their flaws will always make for a far more memorable and three-dimensional character that your reader will take an interest in. And whether they are hero or villain, this connection is essential. No matter what side their loyalties lie on, every character needs to be relatable in order to have an impact on an audience.

Vicious contains a very flawed group of individuals, and none of their negative qualities are sugar-coated. Their flaws are a driving force in the plot. This is the type of story that requires messed up and imperfect characters—ones who are not distinctly good or bad and whose motives are questionable. That is exactly what she has succeeded in creating here, and it adds a great amount of depth to the story. Whether you like them or not, they are utterly fascinating, and you find yourself fully captivated by their plotlines, constantly wanting to know more.

This book is filled with many magnificent examples of antiheroes, and what comes from this is an absolutely enthralling character study. Victor is one of the most amazingly well-imagined characters I have ever read about in my life. His characterization was brilliantly done, and his storyline was absorbing from the very first page. He is that villain that you hate to love, and potentially even love to hate—and though his actions are not always entirely permissible due to his focus on revenge, you find yourself siding with and rooting for him anyway. Overall, Victor is a surprisingly relatable and likeable villain, and an impeccable choice for a main protagonist. He was by far my favorite character in the novel.

On the opposite side of this, from the very first time we see Eli and Victor together, something about Eli immediately rubbed me the wrong way—and as the story progressed, my opinion of him most definitely did not improve. Though he is an intensely dislikable character, his plotline was fantastically well executed. Schwab wrote it in an incredibly interesting way, making it one of those stories where, depending on one’s point of view or position, Eli might not necessarily be a villain in everyone’s eyes.

As a reader, we are meant to feel that he is entirely immoral. His actions are not at all condonable, nor is there any justification for anything he does. And we as the reader are correct in thinking this, because his inhumane actions are not and should not be justifiable; he is a monster. However, it is also easy to understand why he justifies his own actions to himself.

Eli believes that he is doing right, that he is being heroic and fulfilling God’s will, and it would be impossible for anyone working under that type of extreme delusion to see their own—or potentially someone else’s—immorality. While neither Eli or Victor are truly heroes, Eli’s delusion of heroism and inability to see his own inhumanity makes him not only more villainous, but also far more dangerous.

Victor is much more aware of what he is doing and, though he does questionable things primarily for his own motives, that is not the definition of all of his actions. He has far more restraint and humanity left in him—more of a conscience than Eli has. There are certain actions each do individually that it would be hard imagining the other doing. Victor is certainly more aware of the consequences of his actions, and though that might not prevent him from ever doing evil, he has limits and never has any misconception about his purpose in life.

Schwab also fills this book with an all-star set of secondary characters. Sydney is a downright lovely character, and by far the most purely endearing and innocent of the bunch. On top of this, the role that she played in the story was fascinating, and her powers were an element that served to create a lot of mystery and suspense throughout. Another character that added to the huge amount of suspense in the plot was Mitch. Mitch is one of the only other truly lovable characters in the novel, and the juxtaposition of his natural talents against the others’ powers was a highlight for me.

Serena falls more toward the Eli side of the scale of villains. She is quite dislikable from the very start, and while she remains that way throughout the novel, you begin to understand her actions as more information about her is revealed. As with Eli, it is impossible to condone what she does, but you do begin to get an understanding of how aspects of her life—such as her powers—would cause her to act in the way that she does. All in all, though these three are all supporting characters, they are no less vivid or complex than the protagonists, and their plotlines are fully conceived.

Victoria Schwab has produced an absolute masterpiece with this novel. Her three-dimensional characters and unique plotlines work together to create a truly engrossing and addictive read that will stay with you long after you’ve finished it. Whether or not you are a superhero/supervillain fan like myself, this book holds something for everyone to enjoy. If you have not read this yet, I very highly recommend giving it a go. I’m not sure what to expect from the sequel, but I’m definitely looking forward to seeing what happens next; I cannot wait to be back in this world with these characters. Vicious, without a doubt, now holds a place on my list of all-time favorite novels.

I was a little iffy on this book at first but it grew on me. Nice to see a book about superpowered beings that tries something different. Reminds me of the best parts of the Heroes TV series.