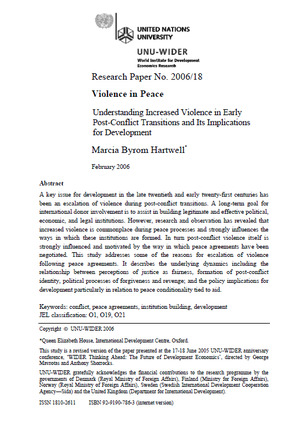 Marcia Byrom Hartwell
A key issue for development in the late twentieth and early twenty-first centuries has been an escalation of violence during post-conflict transitions. A long-term goal for international donor involvement is to assist in building legitimate and effective political, economic, and legal institutions. However, research and observation has revealed that increased violence is commonplace during peace processes and strongly influences the ways in which these institutions are formed. In turn post-conflict violence itself is strongly influenced and motivated by the way in which peace agreements have been negotiated. This study addresses some of the reasons for escalation of violence following peace agreements. It describes the underlying dynamics including the relationship between perceptions of justice as fairness, formation of post-conflict identity, political processes of forgiveness and revenge; and the policy implications for development particularly in relation to peace conditionality tied to aid.