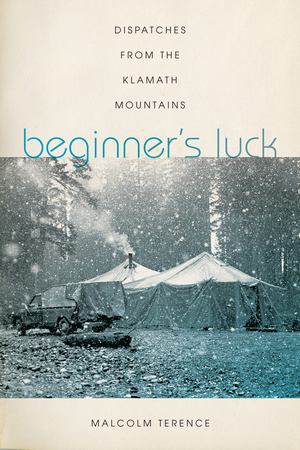 Malcolm Terence
In the late 1960s, Malcolm Terence left his job as a reporter for the Los Angeles Times to look for adventure and may have found more than he bargained for. The era had triggered unprecedented social and political changes in America, tectonic shifts that challenged war and the social order that oppressed people along lines of class, gender, and race. One branch was a back-to-the-land movement, and Terence, who had just traveled for a year managing a rock band, strayed into Black Bear Ranch, a commune just starting in a remote corner of the Klamath Mountains near the California-Oregon border. Black Bear Ranch still exists, but many of its early residents eventually returned to urban civilization. A few, Terence among them, stayed on in neighboring river towns. Some tried logging, others gold mining, and some tried growing marijuana, all with mixed success. The local mining and timber communities had a checkered opinion of their new hippie neighbors, as did the Native tribes, but it was the kind of place where people helped each other out, even if they didn't always agree. When wildfires grew large, Terence and other veterans of the commune joined the fire crews run by the US Forest Service. In between, the Black Bear expats built homesteads, planted gardens, delivered babies, and raised their children. They gradually overcame the skepticism of the locals and joined them in political battles against the use of herbicides in the forest and the Forest Service's campaign to close all the mining claims. As in the best of organizing efforts, the organizers learned as much as they led. Beginner's Luck will appeal to anyone who experienced life on a commune in the 1960s-1970s or who wants to learn about this chapter in modern American history. Terence offers insight into environmental activism and the long history of conflict between resource exploitation and Native American rights without lecturing or pontificating. With wit, humor, and humility, his anecdotal essays chronicle a time and place where disparate people came together to form an unlikely community.