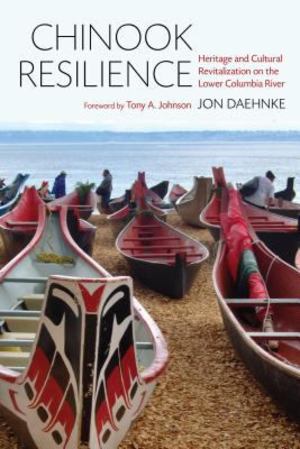 Jon D. Daehnke, Tony A. Johnson (Foreword by)
The Chinook Indian Nation--whose ancestors lived along both shores of the lower Columbia River, as well as north and south along the Pacific coast at the river's mouth--continue to reside near traditional lands. Because of its nonrecognized status, the Chinook Indian Nation often faces challenges in its efforts to claim and control cultural heritage and its own history and to assert a right to place on the Columbia River. Chinook Resilience is a collaborative ethnography of how the Chinook Indian Nation, whose land and heritage are under assault, continues to move forward and remain culturally strong and resilient. Jon Daehnke focuses on Chinook participation in archaeological projects and sites of public history as well as the tribe's role in the revitalization of canoe culture in the Pacific Northwest. This lived and embodied enactment of heritage, one steeped in reciprocity and protocol rather than documentation and preservation of material objects, offers a tribally relevant, forward-looking, and decolonized approach for the cultural resilience and survival of the Chinook Indian Nation, even in the face of federal nonrecognition.