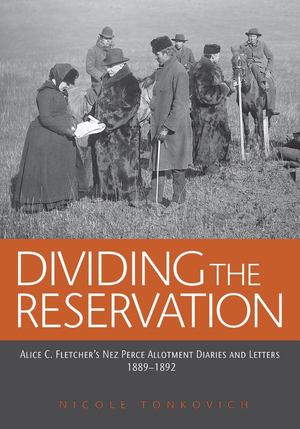 Nicole Tonkovich
Alice Cunningham Fletcher was both formidable and remarkable. A pioneering ethnologist who penetrated occupations dominated by men, she was the first woman to hold an endowed chair at Harvard¿s Peabody Museum of American Archaeology and Ethnology--during a time the institution did not admit female students. She helped write the Dawes General Allotment Act of 1887 that reshaped American Indian policy, and became one of the first women to serve as a federal Indian agent, working with the Omahas, the Winnebagos, and finally the Nez Perces. Charged with supervising the daunting task of resurveying, verifying, and assigning nearly 757,000 acres of the Nez Perce Reservation, Fletcher also had to preserve land for transportation routes and restrain white farmers and stockmen who were claiming prime properties. She sought to "give the best lands to the best Indians," but was challenged by the Idaho terrain, the complex ancestries of the Nez Perces, and her own misperceptions about Native life. A commanding presence, Fletcher worked from a specialized tent that served as home and office, traveling with copies of laws, rolls of maps, and blank plats. She spent four summers on the project, completing close to 2,000 allotments. This book is a collection of letters and diaries Fletcher wrote during this work. Her writing illuminates her relations with the key players, as well as her internal conflicts over dividing the reservation. Taken together, these documents offer insight into how federal policy was applied, resisted, and amended in this early application of the Dawes General Allotment Act.